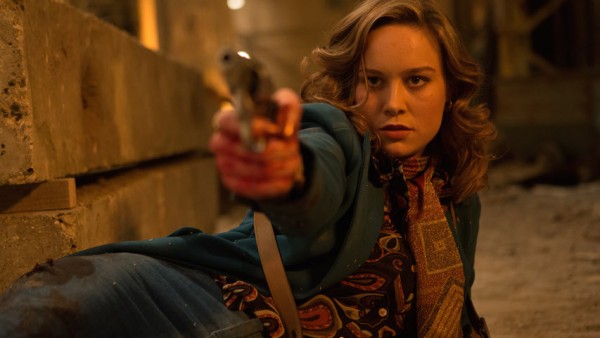 Brie Larson won an Academy Award for her portrayal of a kidnapping and rape survivor in Room, a reward that came after many other harrowing dramatic roles like Short Term 12, Don Jon, The Spectacular Now and Rampart. This time, the conflict is external in Free Fire, an action movie from writer/director Ben Wheatley. 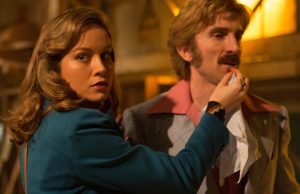 Free Fire is about an arms deal that goes bad in a warehouse. Justine (Larson) is one of many people just trying to get out alive. Larson spoke with reporters in a roundtable in Los Angeles last week and Nerd Report was there to talk to her. Free Fire opens Friday, April 21.

Nerd Report: Doing practical action is kind of a rarity these days. Did you find it more grueling than Kong which was more visual effects?

Brie Larson: That’s interesting. No, it definitely didn’t feel grueling. I think part of it was just the logistics of it’s an independent film so you’re really on task every day and trying to get it done because if you don’t get it shot in time, you’re just not getting it. I always appreciate when it’s in camera because I’m still new to that world. I’m such a visual person that it’s just so much easier when it’s there and in front of you and you’re experiencing it. It adds to the flavor of the film I think. It’s the ‘70s so it makes sense that we would do it all in camera and not try and pump it up with special effects later.

Q: Was it anything like Room being set in one location?

Brie Larson: The thing that was the hardest to fully understand on the page was the logistics of where we were and where we’d be running to and where everyone was. That was the hardest part. After talking with Ben and seeing this little diagram he had made, then it kind of made more sense. I was able to wrap my brain around the script a little bit better. When you’re just reading it on a page, it’s very confusing but there’s something great about the intimacy of just being in one place. A lot of time is wasted on the set when you’re moving to a new location and grappling with a new space. This was just like home. It also meant that we could have a clubhouse basically there. We had a ping pong table and a dartboard and listened to music. It was very homey there.

Q: Did you find dirt in random places after crawling around on the floor?

Brie Larson: Oh, everywhere. Especially later in the movie once it gets wet. Once it becomes mud, it brings a whole other layer of just feeling gross. I think we all know what that feels like. You work a long day and you’re just like, “Ugh, I feel gross. I’m going to take a shower.” This was like a whole new level of stench. And it’s the same clothes. One pair of clothes we shot in order, every single day, that’s slowly getting blown-up and more fake blood and more fake dirt. One of my favorite memories is Ben saying, “All right, everybody get in your positions, and everybody went to their part of the warehouse and you watched all of us start rolling around on the ground to get covered in dirt to match everything else we had done. It’s such a weird thing to see: a group of ten people all rolling around in dirt, doing dirt angels on the ground to try to get ready to shoot. 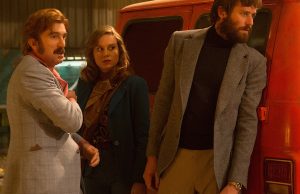 Q: What were the new elements of performance for you in Free Fire?

Brie Larson: Kind of all of it. I think this was the first physical role that I ever did. Just exploring that in itself, dragging myself across a floor for a month was like, “Well, I definitely haven’t done that and I don’t know if I ever will again.” It’s really hard. So just the physicality of it and I guess the action element. Everything I’d done before was really mental. It was very heady and emotional. This was one that was about the opposite. Ben’s whole objective everyday was that we were always super confused, that we didn’t know what was going on. It wasn’t about crafting some sort of perfect performance. It was about throwing it all out the window and being panicked and confused.

Q: Did the atmosphere foster a lot of improvisation that wasn’t on the page?

Brie Larson: That’s a tough one to answer because the way Ben would work is you do one that was on the script and then one that was improvised. I kind of blends into this thing that I don’t really remember when I watch the movie what was improvised and what was in the script. I think a lot of it that’s on the screen was in the script. It was a really good script so I can only imagine that that’s what ended up on the screen. None of us knew each other before. There wasn’t a rehearsal process and it was really smart because none of us know each other. We’re all just supposed to be brand new people in this space and you cross your fingers and hope that it all works out. Luckily, at least for the improv side in particular, the dynamic was really fresh and really there. I think certain things like her disdain for Vernon, which really only the audience watching sees he little eye rolls and little things. Those were things that I addd to it, just playing a little tongue in cheek of not really knowing who she is. I don’t think I even fully have the answer to that. Who does she actually like? Does she actually like Chris or is she playing him too? Who’s side is she really on? That’s the part that I think is really interesting and as I watch it, I’m still kind of fascinated by what she’s aware of, what she’s planning ahead for and what she doesn’t really. She’s just winging it. 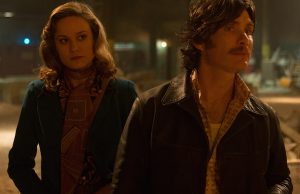 Q: How did you balance comedy with all the action?

Brie Larson: It’s such a funny group so we were just laughing constantly anyway that it just felt like it flowed back into what we were doing on camera. I think what we were all interested in this movie is just if anybody tries to be cool, I guess I should say if all of us tried to be cool, it just immediately looked uncool. I think that’s what was so funny about it. What made us all laugh so much was the humanity of this. It’s not your typical action movie where everybody looks amazing and their timing is right. This is just everything is wrong. Everything’s wrong thWe whole time. It’s so human. It was a blast. I just loved it.

Q: Are you getting in shape for Captain Marvel?

Brie Larson:  Anything that’s the physical side of it, from my past experience, you hire specialists to help you understand that and quantify it and pace you out and figure it all out. That’s part of the fun of making a movie. There’s a person who does the focus-pulling and they’re a specialist at understanding depth. They do something I don’t understand and I do something they don’t understand. My main focus is more on the human side of it.