I’ve been wanting to see more Leos Carax movies ever since Holy Motors. That ambitious, magical anthology of vignettes all starring Denis Lavant as a sort of angel was mind blowing, so I wanted to see what Carax had done prior to that. Now The Lovers on the Bridge is on Blu-ray from Kino Lorber so I got another clue into this profound filmmaker. 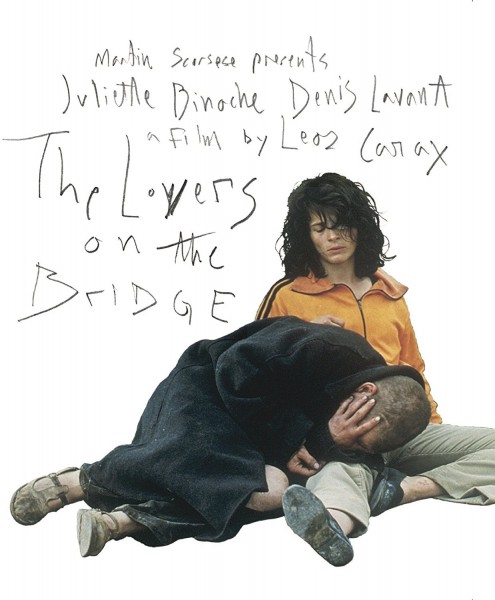 Lavant stars as Alex, a homeless man who finds a spot on the under construction Pont-Neuf bridge. There he meets Michele (Juliette Binoche), an artist who is losing her sight. In the beginning, Lovers is just a stark portrait of homeless lifestyle, how they get by and the relationships they make as they get to know each other. That is all compelling, but then it goes full Carax.

Coming long before Holy Motors, I could expect Lovers would no be quite as surreal, but you can see Carax experimenting and learning tools he would develop further.  Some outrageous things do happen. Perspective warps and music intrudes, not quite like the accordion but appropriately jarring. Juliette Binoche does stunts! That’s not something you’d expect from a drama about homeless people.

It’s not magical like Holy Motors but Lavant does do amazing physical feats. The bridge creates both isolation from the world and a sense of community among the few who live there, and it looks great in HD.

The bridge was a construction by Carax modeled after the real Pont-Neuf reconstruction. Now you can see all the gritty detail of the broken stones in sharp clarity. A fireworks display lights it up one night. Seeing a Paris of 1991 in this clarity is a compelling time capsule, especially since it’s more of the gritty underbelly than the glamor we usually see.

The only bonus feature is a video essay analyzing the film and the film’s trailer. The essay illuminates some contextual aspects that might not be apparent to American viewers, but just watching the film confirms me as a Leos Carax fan. Time to delve deeper.