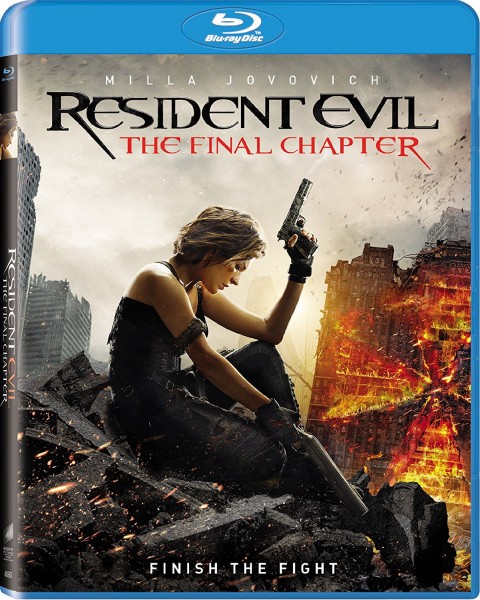 I only ever saw the first two Resident Evils in theaters. I’ve seen the last three sequels on Blu-ray. The theatrical timing in January is just bad for me. So I’m glad to conclude my Blu-ray tradition with Resident Evil: The Final Chapter. Although we’ll see. Nothing guarantees another installment like declaring one “final.” (see Freddy’s Dead: The Final Nightmare, Friday the 13th: The Final Chapter and Jason Goes to Hell: The Final Friday)

Resident Evil: The Final Chapter has a gorgeous, sharp Blu-ray. The exotic locations in the prologue under the cable car shine, but don’t get used to them. The burnt out Washington, D.C. apocalypse and return to Raccoon City are full of detailed wreckage. Dark corridors are pitch black like HD can achieve.

The reliance on shakycam is unfortunate. I’d thought we left that behind with Resident Evil: Apocalypse. It looks like there are some cool new creatures we don’t get a clear glimpse of. Fortunately I was forewarned and at least I don’t have to endure it in 3D. My heart goes out to theatrical viewers.

It’s still pretty entertaining who Alice encounters in her final journey. There’s a Raiders of the Lost Ark gag with a zombie horde, balletic wire gun fu, flaming catapults, a giant turbine, elaborate trap doors. It’s pretty nonstop so if one bit is too shaky there’s something else coming soon.

Retaliation Mode adds about a half hour to the film. Fortunately it’s not branching so you can just fast forward to the parts where Jovovich and director Paul W.S. Anderson talk. They cover the whole franchise as well as scene specific sequences and an alternate scripted ending they never shot.

That’s basically a 30 minute retrospective on the whole series. Three other brief extras on the film and one on the new animated movie do the job too. They feel like a big thank you to the fans. Of course there’ll be another movie. I mean, come on.