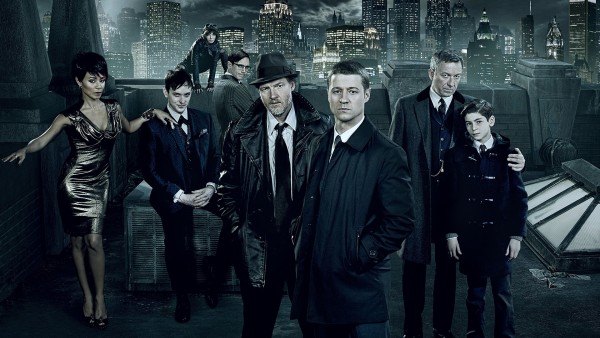 Where’s the justice? Well apparently, it’s not in Gotham. Remember how Lee injected herself with the virus sample she stole from the GCPD? Sure you do. Then she kidnapped and infected Jim and stopped him from disarming the doomsday bomb. Allowing the bomb to detonate and the virus to spread, infecting hundreds of innocent people. Those people wrecked havoc on the city, killed people, and then a lot of them were killed by the GCPD. Well by episode’s end, Jim cures Lee and himself, and then Lee leaves town, no questions asked. Forget the innocent lives lost and the millions in property damage caused by the anarchy, Lee saunters off as if nothing happened, with no mention of her hand in any of this. That’s Gotham justice.

And I am still scratching my head trying to figure out who died in this episode. Remember how I said that death in Gotham is more of an inconvenience than an end? Well Brainwashed-Bruce shoves a sword through Alfred’s chest, killing him. But he feels bad about it after, so he pours some water from the mystical Lazarus Pit on the wound, and presto, Alfred comes back to life. Then Barbra shoots Butch in the forehead, because he was planning on killing her. And you’re pretty confident that Butch is dead. But then you find out he’s not. Butch’s real name is Cyrus Gold, aka Solomon Grundy, the brainless goliath from the comic books. So he’ll probably be back next year as a super villain. Barbara get electrocuted by Tabitha, and is presumably killed. But is Barbara dead or just transformed? And Ed Nygma, The Riddler, is frozen solid by Mister Freeze, per The Penguin’s request. But is Ed dead, or will he just thaw out next year? And finally, Fish Mooney gets stabbed by Infected-Jim Gordon, and killed for the second time. Will she resurrect… again? Is the third time the charm? This show is the real ‘Walking Dead’.

Last week, when the virus infected both Lee and Jim, I knew they’d find a cure pretty fast, and they did. Lee and Jim became virus-infected lovers, but it doesn’t last because they got cured.  And as usual, Boo-Hoo, Lee skips town instead of dealing with her feelings. Let her go Jim, you’re better off without her. Why do all of Jim’s girlfriends go crazy?  Question asked but not answered.  Then Bruce meets the scary Ra’s Al Ghul, who disappears without doing much.  He tells Bruce to kill Alfred, which Bruce does.  But when Bruce gets all whiney about murdering his surrogate dad,  Ghul tells Bruce how to bring Alfred back to life.  Isn’t that a mixed message?  But Ra’s Al Ghul also tells Bruce that he’ll be back, ala The Terminator, which somehow motivates Bruce to don a black ski mask and go out crime fighting. A task he seems woefully unqualified for. Bruce studied with his mystic master for less than a month, which isn’t enough time to master any fighting style. And Bruce doesn’t go to school, so he’s not developing his intellect. And he doesn’t drive, so how does he even get around? Maybe Alfred will help out in a pinch; they can be ‘Ninja Boy & The Butler’, the new protectors of Gotham.

Elsewhere: Penguin, the rejected lover, finally outsmarts smug Ed Nygma and puts him on ice, literally. Which inspires him to open a new ice-themed club. So he can put Nygma’s frozen body on display. The same way Jabba The Hut put Han Solo on display at his establishment. But Han was frozen in carbonite, and The Riddler is frozen in ice, so it’s not the same thing at all. But wait a cotton-picking-minute, isn’t Oswald Cobblepot still Mayor? When Penguin went missing they temporarily replaced him with an interim Mayor. But now that he’s back on the radar, doesn’t he automatically become Mayor of Gotham again? I mean, he is a criminal, but that didn’t stop him from being elected in the first place. Things that make you go Hmmm… And oh yeah, Selina and Tabitha team up, and now Selina knows how to use a whip. Selina died and came back to life too, so that’s plausible I guess.

LAST WORDS: Gotham residents are resilient.  They literally  go through hell every year but never seem any worse for wear…But all things considered;  it’ll be interesting to see what the show looks like when it returns this fall. For better or worse, Gotham continually changes, so you never know what you’re going to get.   SO STAY TUNED!!! … Gotham will be back next season. It will move from Monday nights to Thursday nights, following Lucifer. – And keep your eyes on The Nerd Report. I’ll be at San Diego Comic con, and I’ll keep you in the know.