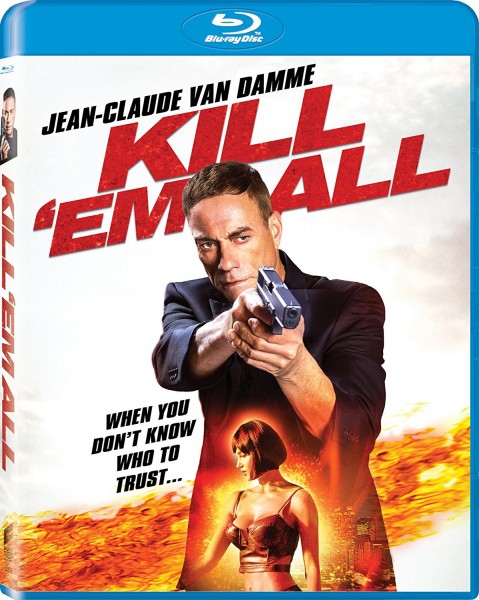 There’s a new Jean-Claude Van Damme motif emerging. When not playing twins, he’s been playing men who fight through their injuries. Kill ‘Em All is not as wild as Pound of Flesh where he still did high kicks after having his kidney stolen. Maybe Universal Soldier counts too because he’s fighting despite being dead, and still has to cool down regularly.

Philip (Van Damme) emerges out the back of a building bloody and injured. Meanwhile, Suzanne (Autumn Reeser) was a nurse at the hospital where Philip’s incident went down. She recounts the story to investigators Holman (Peter Stormare) and Sanders (Maria Conchita Alonso) and we see in flashbacks how Philip took out an elite team of assassins sent to kill him.

There are some decent fights where you can see Van Damme throw some kicks on screen. Some reverse shots look like a different person’s head, but as long as he delivers when he’s on camera you can handle the editing. The other fighters are good but not given elaborate choreography. There’s also a lot of duck and cover shooting.

The dialogue doesn’t seem like anyone did the research, or even watched ER. A doctor says, “Patients with vitals first. No heartbeat no treatment.” I mean, I guess they prioritize the patients who still have a chance. The debrief scenes are most egregious. It’s not Alonso and Stormare’s fault. Sanders and Holman are not written like people who have ever done this before or seen this done.

Kill ‘Em All is filmed widescreen so takes advantage of the HDTV frame even though it won’t play theaters. Adding white strobe in post-production is not a good look for any film. Just do straight flashbacks. Fortunately, that effect is not used often. HD does call attention to the empty location. They say it was a slow hospital day, but it still looks like it’s a film set with no extras.

I wouldn’t go out of your way to see Kill ‘Em All and I could recommend some straight to video movies that give Van Damme more to do. But if you’re a completist like me, Kill ‘Em All isn’t that hard to watch and you get to see the man do some moves.