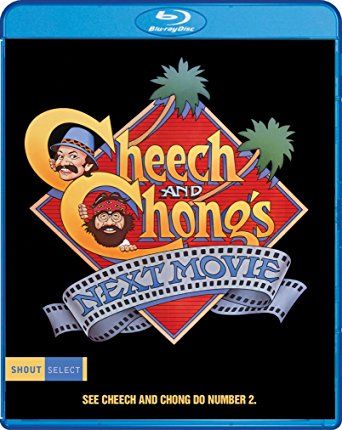 Once I hit my 30s, I lamented that I’d probably seen every movie franchise that was ever created. There would be new ones, but as far as going back and discovering franchises that already existed, I must have caught up on them all. Fortunately, I spoke too soon and there are still new franchises for me to discover. I’ve only seen Up in Smoke before, so I can take on the Cheech and Chong franchise with their Next Movie.

I don’t like pot but have enjoyed movies about stoners. Cheech and Chong seem relatively harmless. I mean, I wouldn’t want to live like them, but they don’t seem to be imposing on others.

Next Movie opens with a clever response to the ’70s gas crisis. They steal gas in the most incompetent way. And then of course you know what they’re going to do in their gasoline soaked car. In Cheech and Chong’s slapstick world, it’s not reckless. They just get covered in black smoke and learn their lesson.

There’s really not a plot. Cheech and Chong just go from set piece to set piece. So it’s ahead of its time because now all movies are just that, not just stoner comedies. It’s fun and I can see these jokes being edgy 37 years ago. It was a real treat seeing Universal City circa 1980 since I still go there now. Cheech singing “my scrotum” makes 12-year-old Fred laugh.

They have a pay phone in their house. That raises so many questions! Who installed it? Do they keep the money? Michael Winslow is documented on film here before Police Academy.

Cheech and Chong could be a shared universe with Pee-Wee Herman too. Paul Reubens is credited as Pee-Wee Herman, so maybe all the Pee Wee movies coexist with the Chongiverse. But this Pee-Wee is wearing a different suit and he swears a lot. And they see him perform standup so maybe he’s just a hot comic cameo.

The Blu-ray picture looks like ’70s film (which they’d still be using) but bright and colorful on the cusp of the ’80s. The graffiti strewn hovels Cheech and Chong live in and visit look rough and gritty. Their bathroom may be a bit much to see in HD.

In a 20 minute interview Cheech Marin admits the appeal of Cheech and Chong movies is a day in the life, not plot. His description of filmmaking as making bricks is apt. They are professional. Post is building the house.