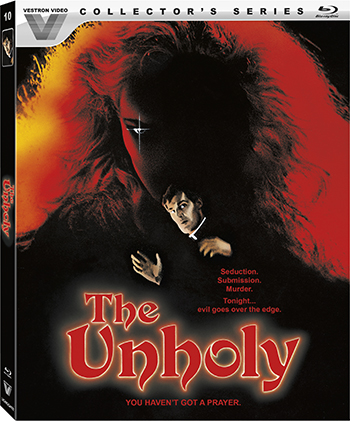 I’d heard about this movie via Fangoria, a movie with a drastically reshot ending to be more Fangoria friendly. That made sense. It was the ’80s. I finally checked out The Unholy thanks to the new Vestron Video Blu-ray series. Unfortunately the new ending doesn’t make the first 90 minutes any less boring, but at least it looks great on Blu-ray.

The Blu-ray looks great with an enchanting demon glowing whenever she appears. It’s a nice time capsule of New Orleans in 1988, old churches with chipped statues and night clubs with satanic paraphernalia. It’s a lot of smoky ’80s atmosphere but the gore prosthetics gush bright red with all the detail of the craftsmanship in latex. The blood barf is especially detailed.

During the original ending, the producer talks about old editing with mag sound sync. I love hearing about that. The original creature is cool to see, even if it’s less mobile. The church floor opening up looks like a cool practical effect.

There are tons of audio and video extras for fans to delve into. I’ve always felt DVDs of flops were more interesting than Criterion Collection masterpieces. The Unholy certainly goes into depth in all aspects of the film, so fans get the whole picture and even haters get an interesting story.

Ben Cross today is compelling to listen to for 20 minutes. The bonus features certainly give production designer/cowriter Fernando Fonseca and the special effects builders a chance to speak in depth too.

The commentary with director Camilo Vila is cohosted by Nathaniel Thompson of Filmstruck so they’re truly giving The Unholy the Criterion treatment. Director Vila still sounds passionate about it, and two more audio tracks reveal even the film score was controversial and harrowing.