I have a lot of issues with Spider-Man: Homecoming. Get it? Issues, like issues of a comic book. But really, this movie has a lot of problems.

Spider-Man: Homecoming could be a fun story about a kid discovering his new super powers. It’s just someone else’s powers. Iron Man’s, specifically. That suit that Tony Stark (Robert Downey, Jr.) gave Peter Parker (Tom Holland) has more powers than his own Iron Man suit. When he can push a different button for every situation, it’s no longer about figuring out how to use his powers of web slinging and sticking to walls. Even Iron Man’s suits are stretching it with new gadgets that apply to this one specific situation in the movie. He has a lot of one time use accessories.

The CGI in Homecoming has regressed. It’s looser and wigglier so you can totally tell when it becomes Tom Holland again because normal physics and gravity resume. One day, someone will make a CGI jump that looks like a human being jumping. His jumps have no weight and he lands with no impact. If Spider-Man never loses momentum then what are the stakes for a chase? 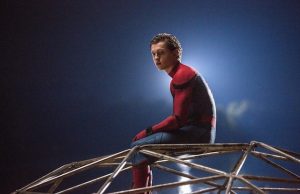 Even though Homecoming is Spider-Man as an Iron Man movie, the one aspect lacking is Iron Man. Downey clearly shot as much as he could in limited time. A scene on a tower in the harbor is clearly on a green screen. Maybe you can’t get the actors up in that tower for real, but at least make it look like they’re outside.

This is probably the most kid-friendly Spider-Man movie. There’s no tragedy (which unfortunately robs it of any morality too) or any Sam Raimi intensity. One bad guy gets vaporized, but he knew the risks of the job. The soundtrack is all classic rock. For whom? 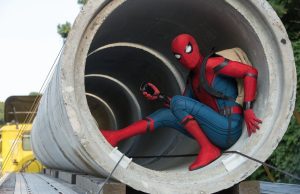 Spider-Man: Homecoming will surely make lots of money. It had the best commercial possible with Captain America: Civil War. There are plenty of Spider-Man Easter eggs and references to the MCU that will make fans happy. Picking up right from the events of Civil War is fun too, but unfortunately it never gives Spider-Man his own movie and saddles him with heavy machinery rather than letting him fly.