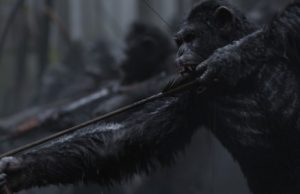 The original Planet of the Apes films were a cautionary tale about what could happen if mankind is not careful. Should evolution take a different course, animals could become the dominant species and perhaps they would be as inhuman to us as some of us have been to them. The all time great twist ending of the original 1968 film made that even more poignant.

The first five films had full body costumes that allowed human actors to play English-speaking apes. That always worked for me. I liked the idea that apes evolved to slightly more human form, retaining primate features, particularly their mouths (and, you know, still covered head to toe in fur.) A 2001 remake made ape suits resemble real apes even more, but that convoluted entry lost track of the message. 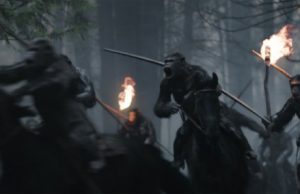 Now we have the technology to let actors perform as real modern day apes. As an exercise, it initially felt like a gimmick to me but there’s no denying the visceral power of the ape rampage at the end of Rise of the Planet of the Apes. Two movies later, War for the Planet of the Apes has merged profound drama with that technology and the performances of Andy Serkis and his ape costars.

More impressive than the technology is how involved we are with the characters. It’s not just Caesar (Serkis). When Winter (Aleks Paunovic) realizes the horror of what he’s done, that is regret more palpable than I’ve ever seen on a human being in my life. Granted, people tend not to show remorse, hence we have this situation where apes are forced to overtake the planet. 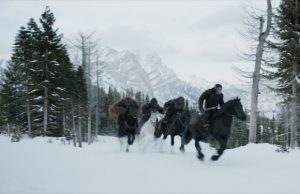 The technology has clearly developed exponentially. There are so many more apes in large scenes and the screen can handle them. Wet fur looks real, and they certainly couldn’t douse Andy Serkis in his motion capture suit. I mean, apes can ride horses now! Can you imagine superimposing the ape over Andy Serkis or Toby Kebbell and trying to make it look right?

War for the Planet of the Apes is the best of this new trilogy. It could still be interesting if subsequent sequels have the apes evolve to become more humanoid, but a few more entries with apes this expressive would be more than welcome too.