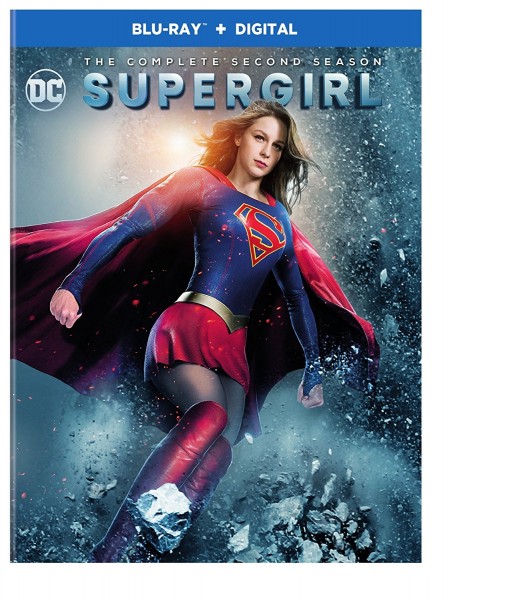 Warner Home Video provided me an early copy of Supergirl: The Complete 2nd Season so that I could finish my review by the time it is available for purchase today.

This is the season of Supergirl that literally saved lives. Thanks to the story of Alex Danvers (Chyler Lee) coming out, gay viewers avoided suicide and came out to their families. They’ve shared their stories on social media and it has been wonderful to witness how a character and show I already loved is taking on greater meaning.

I love having Supergirl on TV every week. It’s what I’ve wanted ever since I was seven. HDTV makes it pretty much like a movie already but it looks even better on Blu-ray. It’s perfectly clear, so no cable or satellite pixelation. Alien colors are bright and textures detailed, including Kara (Melissa Benoist)’s famous blue suit, the Martians and all the aliens in Roulette’s underground fight ring. The lighting on Kara every time she witnesses a supernatural entity is luminous and the streets of Vancouver look gritty when Guardian (Mehcad Brooks) is getting his vigilante on or Kara is blowing baddies out of the sky.

The Aliens Among Us feature touches on the real world allegories in the season, with a little bit of the comic book history. Alien Fight Night is about developing the Roulette story. The 2016 Comic-Con panel runs 28 minutes so they’ve edited out the filler. Supergirl: Did You Know is a collection of sound bites telling us something unique about each person, either their character or in real life.

A Kevin Smith commentary is always worth hearing and he speaks through “Supergirl Lives.” It’s more Smith geeking out asking Andrew Kreisberg about the show’s riffs on comic book characters and the impact of Alex’s story, but he discusses the process of directing any Arrowverse show. Smith is such a fan of the cast he’s still geeking out over them long after he’s directed them.