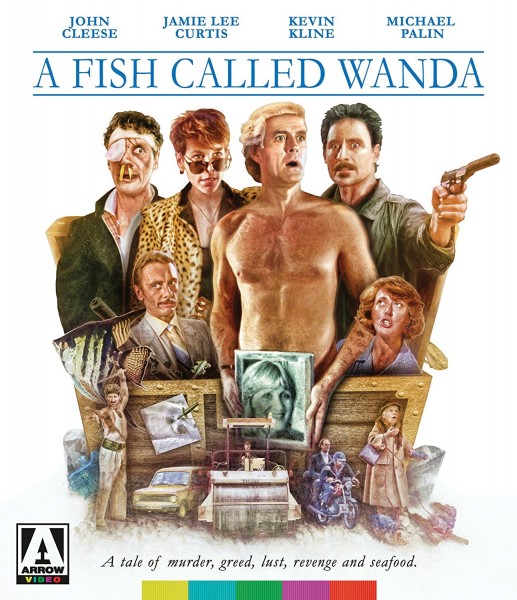 I saw A Fish Called Wanda in theaters in 1988, but it was when I recorded it on HBO in 1989 that I became obsessed with it. I got jokes that went over my head the first time and became obsessed with quoting the film. Perhaps the year between 11 and 12 was full of development of my comedy sophistication.

Seeing A Fish Called Wanda on Blu-ray sort of takes me back to the theatrical experience. The Blu-ray is beautiful and bright. This is not the overcast London we often see in Hollywood movies. There is some gritty detail in the prison visitation room and back alleys. It’s the perfect blend of crime caper and domestic parlor comedy.

The 1988 documentary is both thorough and detailed but with plenty of dry British wit taking the piss out of it, as they’d say. Behind the scenes of the steamroller scene is pretty great. As a kid it took me years to figure out how they did that. (It was so simple. They cut to a dummy getting squished.) The clips in this look like my old VHS copy so they  make me very nostalgic.

“Something Fishy” is a 15th anniversary piece, so 2003. God, next year will be the 15th anniversary of the 15th anniversary. Vic Pratt’s new appreciation pieces recounts the film’s history and he’s thorough for 16 minutes, if not as entertaining as Cleese. Production Designer Roger Murray Leach reassures us the dogs were all fake at the moment of impact, and they thankfully cut the gorier takes. The location tour is unfortunately more interviews with barely any footage of the locations post 1988.

Cleese’s 1988 intro is appropriately Cleesey. It’s a great find of British ’80s publicity. I wish they still did stuff like this but now the stars just tweet about their movies. He takes a shot at Perfect. He spoils the fish scene though. That’s bold.

Now here’s the meat of the Blu-ray. 30 minutes of deleted and alternate scenes from Cleese’s VHS tape (so these would cut beautifully back into my old HBO tape). There’s so much more Kevin Kline brilliance in these. Obviously it’s not necessary and would be too much but it sure is great to see more Wanda era Kevin Kline. These scenes are pure Otto. It’s truly visiting a classic character in new scenes.

Jokes that didn’t work truly didn’t work but it’s interesting to see how they made the right call. And the extra blood on the dog deaths did hurt the joke.

Cleese plays the commentary straight mostly reminiscing about the late director and memories of the cast. He remembers specific inspiration from other popular ’80s movies.

Now it feels a little bittersweet. Perhaps I have scene every last piece of material available from A Fish Called Wanda, unless Cleese unearths some more rare treasures. Well, it was a good ride. It took nearly 30 years for it all to come out, and I’m just as inclined to watch the movie over and over and keep quoting it as I ever was.