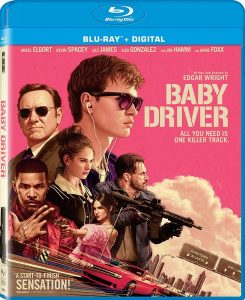 It is a beautiful crisp, clear transfer, seeing Atlanta in all its splendor with shiny cars, Baby’s green apartment and even moodily lit parking garages. The sound is great on my TV speakers so I can only imagine the surround mix for folks whose homes are fully hooked up.

Deleted scenes add some cool moves to “Bellbottoms,” an alternate kitchen dance to a different track and more in the laundromat. It’s not to say any are worse than what’s in the movie. It’s just great to see more Baby (Ansel Elgort) in action. There’s even more running. Parkour! An extra, but significant beat with Doc and more of the “Brighton Rock” drift scene got my heart racing again and I already know how this scene ends. There’s also an interesting alternate final montage without any audible dialogue.

The auditions are great. Ansel Elgort’s is lip syncing “Easy” because that’s super important. He had it in the audition. Rehearsing his “Harlem Shuffle” strut makes me happy.

The 45 minutes of behind the scenes barely seem to scratch the surface. Wright’s TWO full length commentaries (one with DP Bill Pope) go way more in depth. He does not run out of things to say in two full runs of the movie. Even I hadn’t heard about the Oliver Sacks inspiration, or technical things like 32 frames per second shooting, or Barbara Streisand or Hex songs, or Prince’s final concert!

When Pope points out the digital scenes they look worse on Blu ray. I’m sure digital can look great but the Baby Driver Blu-ray was calibrated for film. That’s perfect because over 90% of the movie looks as Edgar Wright intended, with only a few compromises due to the needs of specific locations. This is a must buy for Baby Driver fans.