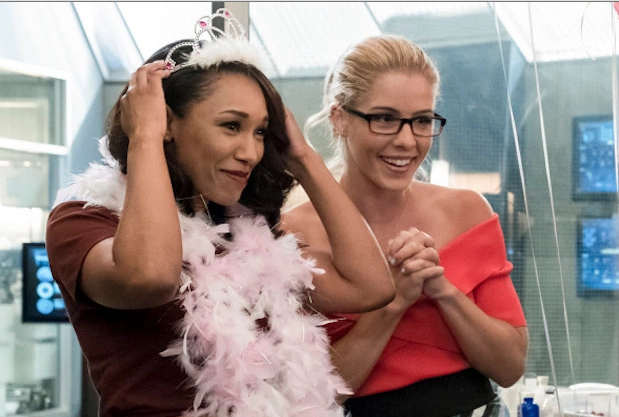 In this bachelorette party gone bad scenario, the Women of Team Flash take center stage, with a little help from Arrow’s Felicity. The women are; Iris, Caitlin, Cecile and Felicity. And while they’re out celebrating in their tiaras and feather boas, Caitlin’s former crime boss comes calling. The six months Caitlin was MIA, she was working for the evil Amulet, in exchange for some meta-tech that could control her frosty side. And when that tech failed to curtail her powers, she tried to leave. But apparently no one walks away from Amulet. No one who wants to stay alive anyway.

So Amulet’s primary thug, the guy with the glass eye, attacks the bachelor party. Iris, Felicity, and Cecile fight back. But when the guy’s glass eye pops out, and a snake-like creature slithers out of his eye socket, Caitlin’s had enough. Angry, she converts to Killer Frost and blasts him through the front window. And accurately, Felicity picks up on her new Hulk-ish persona. When she’s calm she’s Caitlin, but when she gets angry she becomes Killer Frost. Though she’s never really killed anyone, so maybe she’s just “Frost”.

Now it’s time for Amulet to step up. And Amulet is no powerless pushover. She’s a meta-human who can control a certain type of metal, using it as a shield and a projectile weapon.   And during their first battle, Frost against Amulet, Amulet proves that she’s the boss for a reason. And as she puts the hurt on Frost, the women make their escape and retreat back to Star Labs.   That’s when Frost tells them her whole sad story.

But the Ladies aren’t done with Amulet just yet. She’s holding another meta-human hostage, The Weeper, who basically cries drugs. His tears are a glowing blue liquid that is extremely intoxicating. And Amulet plans to sell him to a drug-dealer, who can then market the tears as the next big thing. Well Iris and the ladies aren’t down for that, and set off to free The Weeper. Talk about girl-power.

Iris is no dummy though and she calls for back up. But Barry and the guys are at a skuzzy strip club called ‘The Golden Booty’, thanks to Ralph. And they had to surrender their phones to get in. (Because of the no-pictures-of-the-girls policy). It’s the bachelor party, and Barry gets drunk, thanks to a concoction that Cisco made. And if that isn’t bad enough, things really go south when they find out that Cecile’s daughter is one of the strippers. Joe freaks out, a brawl breaks out; and Joe, Harry, Cisco, Ralph, and comically drunk Barry, end up in jail. Leaving the girls to deal with Amulet on their own.

Iris and the girls go after The Weeper, and almost get thrashed by Amulet. But Frost fully commits to helping the girls, finally becoming a team player, and they figure a way to use a giant magnet to coral Amulet’s metal manipulation abilities. And though Frost wants to kill the now powerless Amulet, Iris convince her that murder isn’t the answer. So Frost lets Amulet walk free. What What! Here’s an idea; Why not encase her in ice and let the police take her to Meta-jail? That seemed like a lost opportunity. So now we know that we’ll eventually see Amulet’s return. STAY TUNED!!!

LAST WORDS: It was great seeing Iris, Felicity, Cecile, and Caitlin take charge this episode. And it seems like we have a new reluctant hero. Mild-mannered Caitlin can become the Badass Frost when she needs to.  And her frosty attitude will add an interesting dynamic to Team Flash. As does Ralph’s questionable standards and moral compass … And speaking of Ralph: When he smirks,Ralph reminds me of the original Darrin on ‘Bewitched’. Anybody else think so, or is it just me?