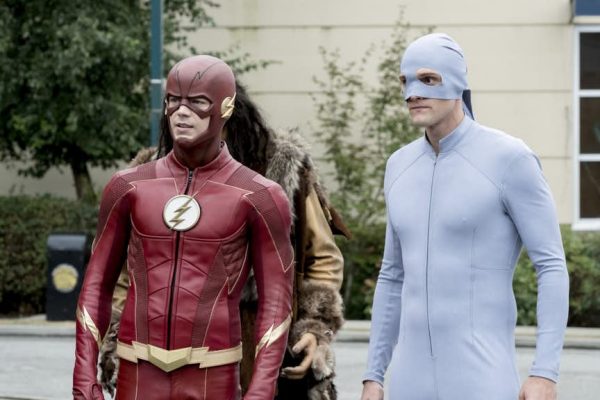 THE FLASH Recap: “That’s A Stretch”

Even though the villain of the story had a totally ridiculous power, I still found the episode enjoyable. Because the story was more about Ralph Dibny, the stretchy guy, learning about being a hero. First off, Cisco needs to finally give the guy his superhero name, The Elongated Man. Then Cisco needs to come up with a cooler costume for Ralph. The one he dons this episode is a bland unitard with an ill-fitted hood/mask. Come on Cisco, it’s time to go to work.

Mina, a professor of cultural anthropology, is the meta-villain this time around. She’s trying to reclaim three parts of a Sioux necklace from art collectors and a museum, and she’s willing to kill to get them. She has the power to bring to life objects that look like people or animals. Yeah, that’s random. So this episode’s shenanigans look like something from a low-rent version of Night At The Museum. A cave man statue comes to life, as does the bones of a T-Rex, a knight’s armor, and a panther statue.

The main problem with the villain and her killer statues is that The Flash should have been able to easily subdue them, using his super speed. But then I guess the episode would have only been ten minutes long, and Ralph wouldn’t have learned his first Superhero 101 lesson: Saving People Comes First. As an ex-cop, Ralph is too focused on stopping the bad guy, and doesn’t pay enough attention to saving the people in danger. But when a little girl almost gets killed, Ralph finally gets with the program.  He can be taught.

The thing about villainous Mina is that, if she didn’t killing people, her mission to return Sioux artifacts to the Sioux people, would have been pretty noble. Luckily Ralph realizes that. And though Mina goes to jail, Ralph pilfers the necklace and sends it back to the Sioux nation. Proving that he’s a good man after all.

Meanwhile, while Team Flash puts Mina away, Harry Wells is trying to track down The Thinker. But he needs help, so he conjures up three comedic variations of himself from three parallel Earths. It’s a think-tank made up of Harry, and the other three versions of Harrison Wells. And though the group clashes at first, they eventually learn to work together, coming up with The Thinker’s name and address. Now he’s in trouble!

Team Flash shows up at the address to face The Thinker. But the normal-looking woman who opens the door, and her wheelchair bound husband, don’t look like much of a threat. The Thinker knew Barry and friends were on their way. Star Labs is bugged after all. So now Barry and Team Flash don’t know what to think. The couple look super-normal, not like super-villains. But it’s only a ruse, so STAY TUNED!!!

LAST WORDS: I like The Thinker’s normal look. Having an everyday looking guy wield all that evil brainpower is more ominous to me than a guy floating around in a futuristic hover-chair, dressed in black leather, with electrodes attached to his head. But the Borg-like getup is how the character looks in the comics. So the show gets a pass on that…  And just for the record; Ralph making balloon animals out of his own hands, to amuse a hospitalized little girl, looked a bit creepy. But hey, his heart was in the right place.