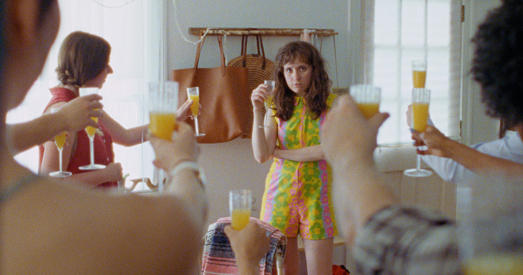 Noel Wells’ voice has been sorely missed from Saturday Night Live and the second season of Master of None, so it’s great to get 90 unadulterated minutes of Wells in Mr. Roosevelt. Wells writes, directs and stars in her feature film directing debut.

I would love to see an entire film about Wells’ expose on the comedy scene. Maybe her next one. Here, she is observant about the comedy/social media culture but transitions to irreverent, whimsical, existential insights. It begins with the well meaning but incompatible conversations non industry people inevitably have work artists at any level. There’s a great friend dynamic between Emily and Jen, who supports Emily but does not enable her. Celeste provides conflict but not antagonism, maybe a tad passive-aggressive.

There are plenty of opportunities for Wells to display her physical gifts with slapstick, in mundane situations at home or bigger displays in public. It never feels like she’s performing, unless it’s literally one of her performances. Emily feels real.

It’s thrilling to see an artist craft a singular vision that happens to be a fine vehicle for all her talents. Pineda is another standout with her endearing energy. Lower, a favorite from Man Seeking Woman, is the perfect wrench in Emily’s machine who you just can’t quite hate. Wells will always be a welcome sight in any show or movie in which she appears, but I hope Mr. Roosevelt offers her more opportunities to create from the ground up too.