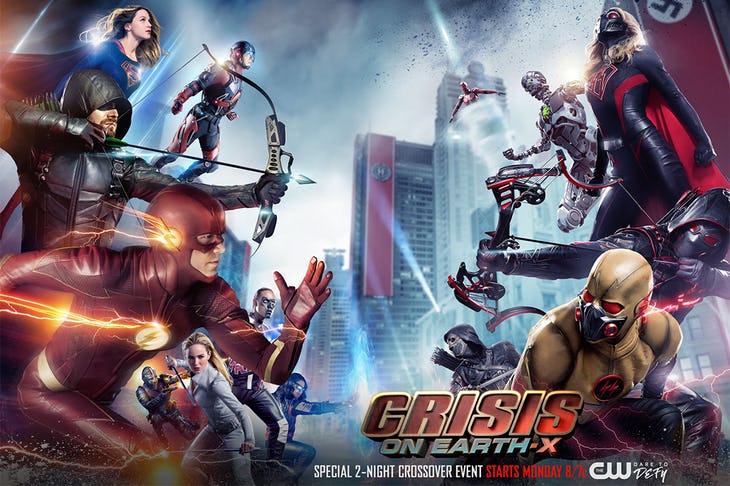 During Barry and Iris’ Wedding, Nazi versions of our heroes attack, attempting to take over our world. We get dark versions of Kara, Oliver, and Tommy Merlin, along with Harrison Wells as Eobard Thawne.   Tommy Merlin was Oliver’s best friend, who died at the end of Season one of Arrow. He’s the son of the evil Malcolm Merlin, and Thea’s half-brother. But he’s only around for shock value, because he downs a poison pill when he’s captured. So poor Tommy’s dead yet again.

The two-hour episode was good. There was just enough fighting and heroic daring do, mixed in with character stuff. Alex and Sara get drunk and have a one-night stand, which Alex freaks out about. Oliver asks Felicity to marry him, and she says ‘no’. Kara is still upset that Mon-el, the man she loves, recently returned to her Earth married to someone else. And Professor Stein wants to stop being Firestorm, but Jax is having Daddy issues. That’s a lot to deal with at one wedding, even without a Nazi invasion.

And who was invited to this wedding? The absences bothered me. The church was half empty, but some key people seemed to pass on the nuptials, if they were invited at all. Where was Ralph Dibney, Team Flash’s new Elongated colleague? Team Arrow’s John Diggle and Lyla were also notably absent, without explanation. And Legends’ Ray Palmer was also inexplicably missing, along with the rest of the time traveling cronies. But anti-social Mick made the cut. What up with that?

My other complaint was that characters were poorly used. Wally West was in the melee for a quick minute, but Barry and Company sent him away to babysit Joe and Cecile. The Flash sure could have used Kid Flash when fighting Reverse Flash. And while Killer Frost made her heroic debut, they made her a lot weaker than she used to be. And dark Oliver easily dispatched Frost. Cisco also got knocked out early on, and so Vibe was down for the count most of the episode. Lets just hope these heroes get a second chance to shine in part two.

But invasion isn’t the only reason our Earth-X heroes are here. Dark Kara needs a heart transplant, and her husband, Dark Oliver, thinks Supergirl is the perfect donor. So they capture our heroes and take them back to Earth-X.   That’s a bummer. Flash, Arrow, Firestorm, White Canary, and Alex are in a concentration camp of sorts.   They have glowing blue collars on, that I assume negates any super powers. And Supergirl is nowhere to be found, as she’s possibly being prepped for surgery. STAY TUNED!!!!!!!

LAST WORDS: Though Star Labs is overrun with Nazi troops; Felicity and Iris are still free, so there’s hope. But most of our heroes are in pretty bad situations, so what are two non-powered women supposed to do? I guess we’ll find out in Part two…..