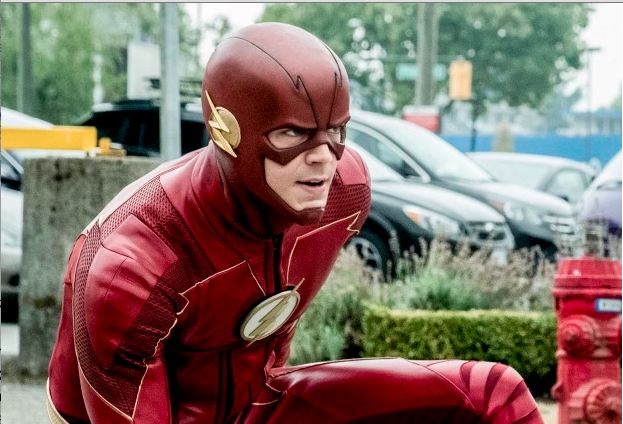 Barry Allen is on trial for a murder he did not commit. He’s been framed by The Thinker, a meta-human mastermind, and Barry’s pretty much up crap-creek without a paddle. So with The Flash on trial, who’s protecting Central City? Kid Flash would be the logical default speedster, but he’s a no-show. I guess he’s still off soul searching while his brother/brother-in-Law is fighting for his freedom.   So Vibe and Killer Frost have to step up to stop Fallout, a meta-human that’s a potential nuclear bomb.

Unfortunately, the B-Team isn’t up to the challenge. So Barry Allen has to walk out on his own trial to suit up and save the day. It’s a move that doesn’t sit well with the judge. So don’t try that at your next murder trial. Of course he could exonerate himself by admitting to the world that he’s The Flash. But Barry just won’t do it. Iris almost does it for him though, to save her new hubby from a life behind bars. But Barry and Iris take a walk in the speed force, away from prying eyes, and Barry explains that if he gives up his secret identity everyone he loves will be in danger.

So Barry takes a big one for the team. He does not reveal that he’s The Flash. Meaning that there’s a lot that happened that he can’t explain. Which doesn’t leave him with much of a defense. And by episode’s end, Barry Allen is found guilty of 1st Degree Murder, and sentenced to life in prison with no possibility of parole.   A harsh sentence to say the least, but the judge is still visibly upset about Barry walking out on his own trial, and pretty much throws a fit while throwing the book at him.  So Barry saved the City, like he always does. But instead of getting the commendation he deserves, he gets a murder conviction and a lot of attitude.

A few positive things did happen this episode: For one, Ralph steps up and takes the moral high-ground, talking Joe out of illegally planting evidence that could have saved Barry but cost Joe his soul. And two, Captain Singh actually had something to do. I mean, he probably talked more in this episode than he has all season. Then there’s sweet little Caitlin, who finally figures out how to Frost up on command. And I for one think they should let Killer Frost more often. She’s gotten a little soft and is too easily defeated these days. Maybe a few training sessions will toughen Killer Frost back up. She used to be a badass!

Barry Allen is indeed innocent of murder. But then again, so was his father. So it’s kind of a full-circle moment when Barry realizes that he’s been jailed in the same cell his father once served time in. And we know this because we see his named etched into the wall of Barry’s cell. So what’s a hero supposed to do? Barry’s locked up and the judge threw away the key. So what happens to The Flash? I guess you just have to STAY TUNED to find out.

LAST WORDS: Bring back Kid Flash! I know they are planning big things for Ralph, who may yet become the heroic Elongated Man. But he City is down one speedster, and team Flash has a spare. So take Kid Flash off the bench and put him in the game coach.  He’s ready. And even if he isn’t, watching Wally mature as a hero would be a whole lot of fun. And if Ralph does begin his own superhero journey, at least give him a better costume to fight crime in… please! 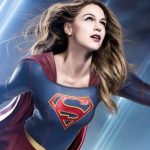 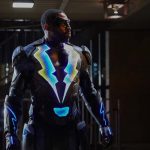