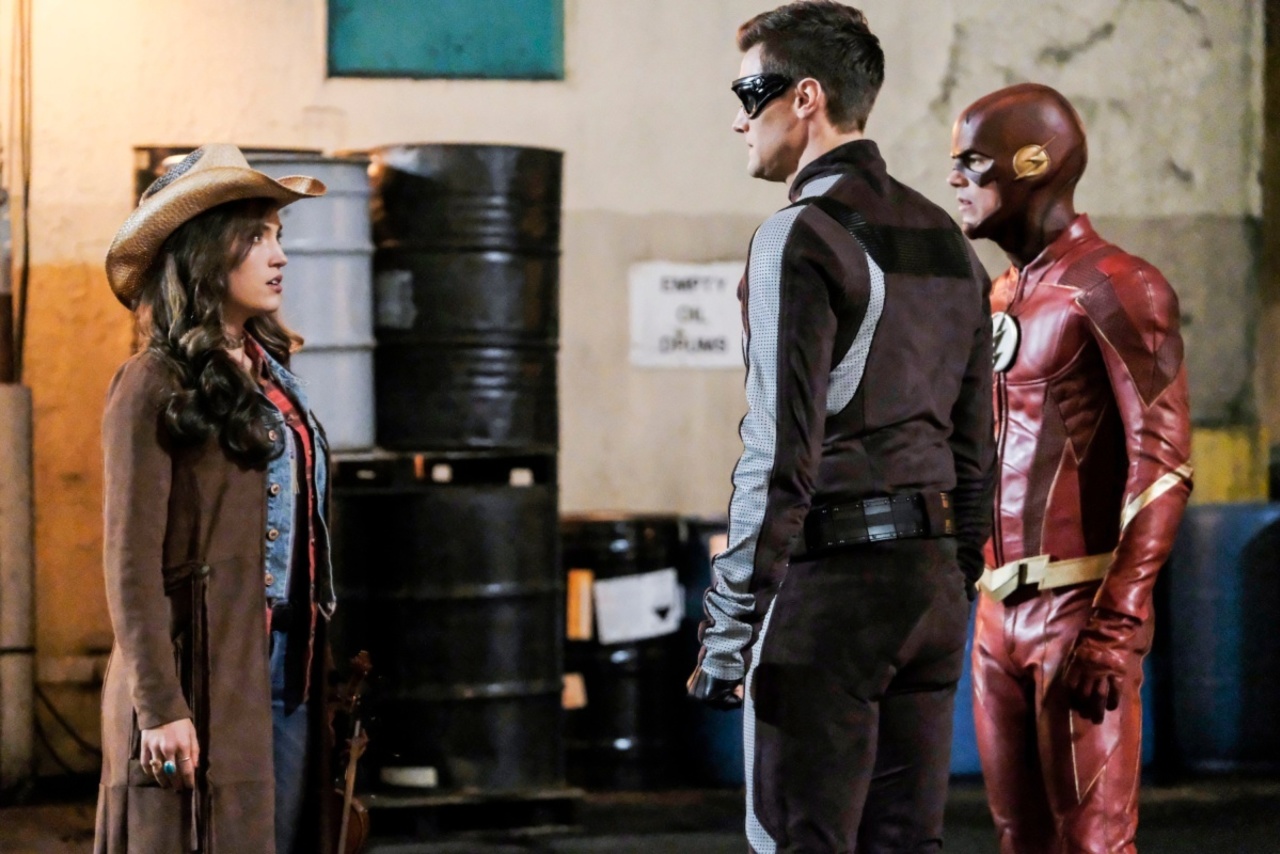 The Meta-human of the week is a country music fiddler with a sonic ability similar to Black Canary’s, minus the actual screaming part. Ralph falls in love with her, Barry pushes her too hard when training her to use her powers, and DeVoe wants to absorb and become her. Huh? I guess now that DeVoe has absorbed all those other Meta-Human abilities, his current body can’t take the strain and begins to deteriorate. That’s a bummer. Makes you wonder what his end-game is. Because if absorbing powers wears out his host body, doesn’t that mean that eventually he’ll be all-powerful, just before he dies? That doesn’t sound like a good plan.

Barry and Ralph find The Fiddler at a local club and eventually convince her that her life’s in danger. She agrees to go back to Star Labs. But when DeVoe strikes, crippling Barry and Ralph, The Fiddler is able to hurt him with her sonic abilities. And this gives Barry and idea: If her powers can hurt DeVoe, then train The Fiddler to be a part of Team Flash. That way she can help them stop DeVoe, and she can defend herself. It’s a good plan that was poorly executed.  Barry is impatient and gets all pushy and demanding. And his training regiment for The Fiddler is borderline abusive. So the Fiddler runs away, upset, determined to take on DeVoe all on her own. Which is a big mistake.

The Fiddler confronts DeVoe and pretty much gets shut down immediately. Barry and Ralph super speed to the rescue, but Devoe is too strong, dealing with them easily. –Because Barry and Ralph charge in fists flying, without a real plan – When will they learn? Needless to say, DeVoe absorbs the mind of the Fiddler, freaking out Ralph. And now DeVoe’s mind is in the Fiddler’s body, which pretty much means that the Fiddler’s mind is gone. There’s no coming back from a DeVoe body swap. – Note to The Flash producers: We like Ralph now, so don’t let this happen to him.

Despite their horrible track record, this latest failure inspires Team Flash to do their best to find and protect the last three bus meta-humans, whoever they my be. And remember that Ralph is also a bus meta-human, so at some point DeVoe will be coming after him too. And oh yeah, Barry got fired from the CCPD because of all the DeVoe-got-murdered-stuff that went down. And now he’s working with Ralph as a private investigator. Harry built a neural inhibitor to help fight DeVoe, but it didn’t do much, which was an ego-deflating moment for Harry. And Harry’s also is having problems with his daughter, Jessie Quick. Apparently she hates him now but we don’t know why. So stay tuned, because she’ll be speeding in to Central City next week, along with Jay Garrick, Earth-3’s Flash.

LAST WORDS: Team Flash needs a win before the final showdown with DeVoe. Their missteps are becoming hard to watch. Luckily, next week there will be three Speedsters in the mix, so maybe that’ll help stop their losing streak. And what’s up with Cecile? Why does she have a telepathic mind-reading ability? The whole thing is so random; it’ll be interesting to see how it all plays out. I just hope they don’t plan to kill off Cecile or the baby. That would be awful, and more in the realm of an Arrow episode.   So let’s hope that’s not where this storyline is headed… And Wally West is flying around time with the Legends so he won’t be back for a while.  But Jesse Quick will super speed to Legends soon. So look for either a happy Wally/Jessie reunion, or an unhappy Wally/Jessie confrontation…