This super freaky-friday scenario happened on LOIS & CLARK, SMALLVILLE, and now THE FLASH. The superhero’s non-powered significant other acquires the powers of the hero, leaving him powerless, for one episode. But this episode of The Flash was a whole lot of fun, just like the like-minded versions on those previously mentioned shows. And nothing’s wrong with having a bit of fun. A new bus Meta-Human is the cause of the Barry and Iris switch. And this newly powered guy isn’t evil, he’s actually trying to be a hero. Which is nice change of pace. The Barry/Iris power swap is a total accident.

But now that Iris is the speedster, and Barry isn’t, they get to try on each other’s shoes. And it’s not a great fit. Iris has had zero training as a speedster, so her first attempt at heroics almost gets her killed. And Barry freezes as team leader, not knowing what to do to save her. But fortunately, Cisco steps in as Vibe, and comes to Iris’ rescue. That’s one of the plusses of this episode; Iris didn’t just automatically know everything that Barry knows, because it took him years to learn it. In Lois & Clark, Lois pretty much got powers and knew how to use them with only a minor tutorial. 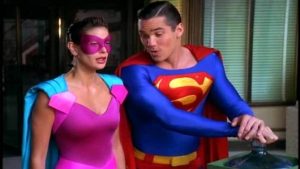 Another cool thing about this episode is that we learn things about Iris that we’ve been wondering about. Did her encounter with Savatar change her? – Yes. Is she still a reporter? –No. Her near-death encounter with Savatar left her shaken and a bit gun-shy. So she quit her job.  And being team leader, always guiding things from behind a console, took her out of danger. But Iris doesn’t think that losing her nerve is a good thing. So she sees this new opportunity as a way for her to get back out there on the front lines, like the rest of the team. So Barry begins to train her to be the new Flash. – Caitlin can’t find a way to transfer the speed force back to Barry, so they fear the switch may be permanent. – But we all know that’s not the case.

Almost on cue, a new meta-villain shows up for Iris to confront. He’s got fire powers and creates a tornado of fire near the seafront that could kill thousands of people. So with Barry coaching from Star Labs, Iris is able to run on water for the first time and create a mini tidal wave to douse the bad guy’s flames. And that’s a speedster trick that even Barry hasn’t done yet. She also catches the original ability-swapping Meta-Human and brings him back to Star Labs. And like I said, he’s a good guy, so he’s more than willing to set things back to normal. And he’s also willing to help the team fight DeVoe. So looks like he’ll be sticking around for a while.

Iris feels better about herself, now that she’s got her groove back, and begins to blog again. Which is how her writing career began in season one. But both Ralph and Harry took a turn this episode. Fear turned Ralph into a big stretchy jerk, and he lashed out against Iris a couple of times. But his cruel verbal jabs did spur her on to confront her personal demons. And he apologizes by episode’s end. So that’s all good. But Harry is so obsessed with DeVoe, he copies the thinking cap that initially gave Devoe his brain boost. And then Harry pretty much shocks his own brain, the way DeVoe did, to get smarter. And while the process works, will the thinking cap turn Harry into a super villain as well? I guess only time will tell – STAY TUNED.

LAST WORDS: This was a good episode. I really enjoyed it. But I did miss Wally this week. It would have been cool to see Iris and Wally as a brother/sister speedster team. With a touch of sibling rivalry thrown in the mix for a bit more fun. But alas, Wally was off on Legends saving Elvis Presley. And they didn’t really use Killer Frost this week, even though we did see a building go up in flames. It would have been ‘cool’ to see her ice over and put that out. Just a thought.