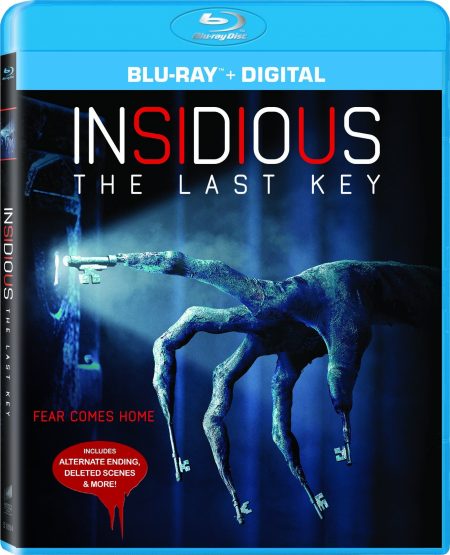 Brilliant parapsychologist Elise Rainier receives a disturbing phone call from a man who claims that his house is haunted. Even more disturbing is the address — 413 Apple Tree Lane in Five Keys, N.M. — the home where Elise grew up as a child. Accompanied by her two investigative partners, Rainier travels to Five Keys to confront and destroy her greatest fear — the demon that she accidentally set free years earlier.

I give the Insidious: The Last Key Blu-ray a B+.

Let’s travel into the Further with Insidious: The Last Key.  This is the fourth film in the franchise and in my opinion, this is the best. Though I know some people didn’t like this one as much as the others.  It is a little weird to see Elise alive as she died in the very first film as this film is a prequel to that one.  Specs and Tucker return as Elise’s geeky sidekicks.  What makes this different from the other films is that it goes more into Elise as a child.

There are many things I did like about the film.  One is definitely Lin Shaye who plays Elise Rainier. She is the heroine that no one talks about (or more fittingly the heroine of Horror).  Forget about Wonder Women,  she’s a superhero in her own right.  I admire her character’s courage and strength when walking into some of the situations she faced.   If you’ve been watching Season 6 of Arrow on the CW, you may have recognized Kirk Acevedo (who plays Ricardo Diaz in Arrow and Ted Garza in Insidious: The Last Key).  His character seemed like a man that just wanted control of his house back (Elise’s childhood home) but he actually had a sinister secret he was hiding.  *Spoiler Alert* My favorite scene out of the entire film was when Elise was pinned down by Keyface in the Further and Imogen throws her (Elise) the train whistle.  Elise blows it and her mother appears.  It was like her mother’s (or any mother) protective nature helped her even in the afterlife.   I liked the idea of Keyface having keys as fingers but I felt that the Darth Maul looking Demon (Lipstick-Red Demon) and the Bride in Black in the previous films was scarier.

Don’t miss the Special Features on this Blu-ray.  It was like watching another movie.  Some of the deleted scenes were just as scary as the film.  I was thinking to myself, “Why wasn’t this in the film?!?”