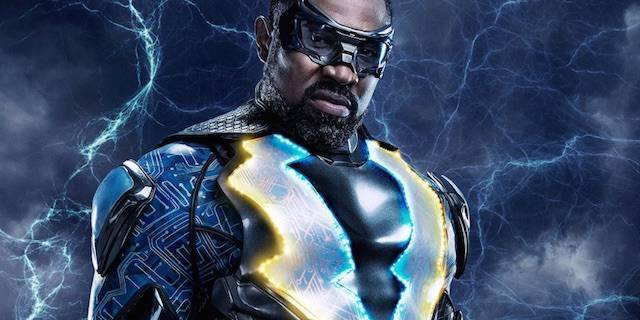 Last week, Gambi endured a pretty brutal beat down, but he still didn’t give up Black Lightning’s secret identity. Though his former friends at the ASA think they’ve figured it out. And we also found out that Jefferson Peirce’s Vice Principal is working as an operative for the ASA. Which clears things up for me. I always felt that she was destined for something more. Though I thought she’d be one of the good guys. Now we know that she’s part of the ASA’s plan to create and collect young meta-humans, using green light.

In this episode, Jefferson gets arrested. Hauled out of school, in front of his beloved students like a drug dealer. His Vice Principal had the Chief Of Police plant green light in Jefferson’s car. The plan is to eventually spirit Jefferson away to an ASA facility, prove he’s Black Lightning, and then kill him. Those guys don’t play. But even bruised and beaten, Gambi isn’t down and out. So when Anissa comes to ask for his help, he’s already got a plan to prove that Jefferson isn’t Black Lightning.

But Gambi isn’t Jefferson’s only friend. His pal on the police force is also fighting for his release, by going after the dirty cops who set him up in the first place. Even if that means that he has to bring down the head of the department. And Lynn is trying to line up the best defense lawyer in town. Which I suppose is a good thing. But I think it’s time for Lynn to do more. Why is she still Jefferson’s ex-wife? Especially now that both her daughters have powers too, and need her the most. Why not move back in, reunite the family, and work together Lynn? Is your bachelorette pad really that cool?

Thanks to Gambi and his tech skills, Thunder is able to go out on patrol with a hologram of Black Lightning. And the whole town sees them both. Therefore, since Jefferson is in jail at the same time Black Lightning is seen running around town, it proves to the ASA that Jefferson Pierce isn’t Black Lightning. Mission accomplished Gambi. But the ASA dudes are jerks, and still won’t let Jefferson out of jail. Luckily, Jefferson’s inside man proves that Jefferson was framed, takes down the Chief of Police, and then takes his job.

So by episode’s end, Jefferson is free, and nobody thinks he’s Black Lightning. Jefferson also cut Gambi some slack, and invites him over for family dinner. After all, Gambi did save his life. And there’s a new man running the Freeland Police. He’s a good man and an honest Cop. But how long can an honest man survive in such a corrupt environment? I guess we’re about to find out. STAY TUNED!!!!!

LAST WORDS:  This was another great episode, even though we didn’t see much Black Lightning action.  It hit an emotional home run with the Gambi’s redemption storyline. Showing how much he loves the family, and how much they love him, no matter what he’s done.   But next week we should see Tobias Whale’s return, as well as LaLa’s. And that’s great.  But the bad news is that there are only a few more episodes left this season.  And the good news is that the show was renewed for a second season.  So it’ll be back soon…