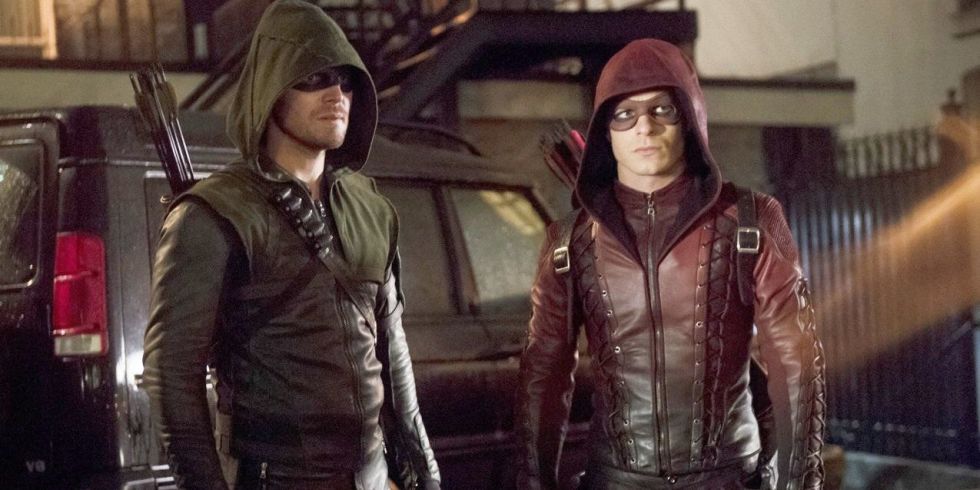 Next season Roy Harper aka Arsenal will be back on Team Arrow.  And judging from how this season is going, Green Arrow needs someone in his corner.  The Arrow cave is pretty empty.  Mad Dog, Black Canary, and Mister Terrific split off to form their own team, and pretty much hate Oliver.  Even Diggle left the fold, tired of being hero-support instead of the hero.  So it will be interesting to see who returns next season.

Mad Dog is injured and hasn’t been on the show at all for the last few episodes. And Dinah has been so bitter lately, I don’t see how she can return to Team Arrow. I think she burned that bridge.  Black Siren is still a wild card.  She has assumed Laurel Lance’s identity, and is bonding with Quentin, but she still may be evil.  So I’m guessing her return depends on how things shake out for her by season’s end.  Thea is gone, and I don’t think she’ll be returning when Roy does.  (Though she may make a few guest appearances next year.)  Diggle is disgruntled, but I think his friendship with Oliver may bring those two back together.  And Curtis, as Mister Terrific, could come back to team Arrow if his current team falls apart.

But, until we hear otherwise, I think the line-up so far is: Oliver, Felicity, Roy, and Diggle …  Here’s what Colton Haynes had to say about his return; “I could not be happier to return to my role as Roy Harper alongside my Arrow family.”  – Happy to have you back Roy. Green Arrow needs you!