Well we just found out what it takes to be in House Zod, and it ain’t for the squeamish. Through a series of flashbacks, we see Lyta’s Mother Jayna Zod as a child.   And there’s a lot of ruthless fighting and betrayal going on. House Zod definitely believes in the law of the jungle; survival of the fittest. And teamwork doesn’t appear to be a viable option, even when it means leaving your brother in the Frozen Badlands to die so that you can survive. We already knew that House Zod has a strict “No Mercy” policy. But now we know that it applies to their immediate family too. So I guess at Kryptonian Thanksgiving, if there’s only one turkey leg left, you kill the rest of your family to get it.

The House of Zod are the loyal protectors of Krypton. And it’s an honor they don’t take lightly. But is a Mother’s love stronger than brutal training and hereditary loyalty? The answer is yes, but just barely. Jayna Zod goes against everything she believes in to save Lyta from being executed as a traitor. She agrees to side with House Vex in there proposed coup against the Voice of Rao. Which means that, to have Lyta set free, Jayna becomes a traitor. And Jayna let’s the newly freed Lyta know, in no uncertain terms, that while she does loves her, Jayna’s also disgusted by her.   Remember that Lyta is keeping Seg-el’s secrets, and they are big world-changing secrets.

Dev-em is glad to have Lyta back, and he confesses that he loves her, even if she doesn’t love him in return. They are engaged after all. But Lyta kisses Dev-em and tells him that she does love him. What, what!! We know that Lyta and Seg-el are in love. So is she lying to Dev-em, just to be kind, because he is a nice guy? Or is there a love triangle happening here?  And remember, there’s also a possible  Lyta, Seg, Nyssa love triangle that’s also happening.  So is it two love triangles, or a big and messy six sided hexagon of emotions?  And what about Seg-el? The last time we saw him had been kidnapped by a Black Zero dude and was being held prisoner in some abandoned tunnels under the frozen badlands.

Glad you asked: Seg-el escaped into the frozen badlands, but had to go back to the tunnels to survive. That’s where he met and freed a fellow prisoner. Then she takes Seg-el to her hidden home within the tunnels, which is only semi-safety. And once there, Seg-el meets her group; people who live in the tunnels and worship the Kryptonian Ice Goddess. Which makes sense given that they live under the Ice. The Priestess is regal and weird, kind of like The Voice Of Rao, but instead of a multi-faced mask, she wears what looks like a chandelier on her head. And I said Seg-el is semi-safe because these new people hate the House Of El, and they are trying to decide if they want to kill Seg, or just keep him locked up.

That’s why Seg-el escapes, finding himself back in the frozen badlands with a faulty breathing apparatus. But before he dies out in the snow, he manages to get a message to Adam and Lyta, who come looking for Seg. But before they can find him, the Black Zero dude does, and he recaptures Seg. He is tenacious!  But Lyta and Adam find them and begin a brawl with the Black Zero dude and his minions. The fight is pretty intense. Until the Black Zero dude stops when he recognizes Lyta. And in the big twist of the night; The Black Zero dude, who looks old enough to be Lyta’s Dad, announces that he is actually Lyta’s son. What, what!!! Did this guy take too many punches to the head, or is this another time travel thing? And he also knows about Brainiac. So stay tuned and we’ll find out together!!!

LAST WORDS: Is Adam Strange gay, or maybe bi-sexual? There is a scene that more than hints at same-sex-attraction. When Lyta and Adam run through a Sagitari locker room, Adam Strange locks eyes with a naked man, and both seem intrigued. And when the muscular dude turns and walks away, Adam is equally intrigued by his bare bottom. Then Lyta throws a backpack at Adam and they run off to the badlands to save Seg. 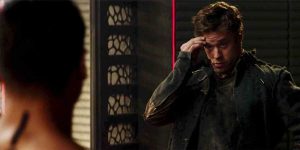 The entire encounter only took a few seconds, but spoke volumes. But who knows if Adam’s sexual preference will be explored beyond this quick flirtation. There’s a lot of other stuff going on. But I will say this: At Wondercon’s Krypton panel, a hint was dropped about the inclusion of the LGBT community. And Adam Strange’s name did come up… So take that for what it’s worth, because either way, I’m good with it.