The first few episodes of Krypton moved rather quickly, setting the whole Brainiac scenario in motion. But now Krypton seemed to be weighted down by too much time travel, and the soap opera elements of the story. I don’t really care anymore if Seg and Lyta end up together, in light of all the actual world-changing events that are happening all around them.  And what about Brainiac?  If he’s such an imminent threat, why is he taking his sweet time before actually doing anything? And how did Lyta’s future son, General Zod, travel back in time? And since he came back 200 years, shouldn’t he be her Grandson? Or is the Kryptonian life span that long? And did General Zod come back in time to save Kandor, or did he arrive to just make the storyline even more confusing? Because that’s what he’s done.

Here’s what happened: Adam Strange and General Zod clash, as is expected. Adam wants to kill General Zod, because he’s Superman’s enemy. And Zod wants to save Kandor, and stop Krypton from exploding, which will erase Superman. And Lyta and Seg-el are wondering who General Zod’s daddy is, and why they don’t end up together in the future. It’s enough to make your head hurt. And when push comes to shove, Seg and Lyta side with General Zod, hoping to save the planet, instead of Superman. And what the heck Adam Strange?  He doesn’t seem to know his hind-end from a hole in the wall. Honestly, for a guy who traveled through time and space to save Krypton, Adam Strange is so clueless about  Kryptonian history, he’s not even sure he should have come at all. 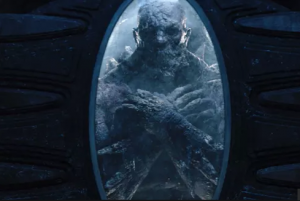 Meanwhile: Seg, Lyta, and General Zod track down the one weapon that may be able to stop Brainiac and save Krypton. And that weapon’s name is Doomsday! You know him, he’s the unstoppable creature that someday is destined to kill Superman. Well, he’s locked behind this vault door, sealed in by the two houses that created him; House El and House Zod. The vault has a blood lock, so they need Seg and the General to do a hand slice and bleed all over the lock pad to open the door, which they do. – And this is the second time Seg has had to do this. So his hand must still be hurting fromt the other time. – Then they open the vault and are amazed at what they see.  Doomsday is frozen via suspended animation, but alive.  They take one look at the horned brute inside, and then lock it up again. What!?  I guess they realize that a mindless killing machine like Doomsday would probably kill everyone in Kandor, not just Brainiac.

And speaking of Brainiac, he’s taken over the Voice Of Rao. So now he’s pretty much in charge of everything. And his timing is right on, because the coup Nyssa-Vex and her Dad planned is set in motion, and The Voice Of Rao dude was about to get executed. But needless to say, with Brainiac’s green gunk running through his veins, he’s got more than enough power to stop the attack and convert the attackers to Team Brainiac. So I guess Brainiac’s existence is finally revealed.  And now that Brainiac has revealed himself; what are Nyssa, her Dad, Jayna, and Dev-em supposed to do? Not only is this proof that there is intelligent life beyond Krypton, one of those alien life forms has taken the place of their God, and is in control of Krypton’s fate. That’s a lot to take in on one day.

LAST WORDS: Here’s what’s supposed to happen: Brainiac steals Kandor, ripping the entire city off the face of Krypton, shrinks it, and places it in a bottle for study and preservation. That destabilizes the planet’s core, and Krypton explodes in 200 years, just after baby Superman is sent to Earth in an escape pod. – But if Brainiac is stopped somehow, then does that mean that Krypton doesn’t explode, and there is no Superman? Is this where the show is going? – And this week, for the first time, they mention that there are other cities on Krypton, not just Kandor. But the cities on Krypton are there own separate communities, with little to no contact with each other. So if Kandor does fall, our local heroes and non-heroes could become refugees in another Kryptonian domed city. – And how does a time-traveling General Zod fit into this story, or a clueless Adam Strange for that matter? And why is this story so hard to follow now?! I’m asking you David Goyer!…..

( RATINGS  UPDATE  Y’ALL: Krypton’s ratings have been falling every week, which puts the show in danger of cancellation.  But even with the resent missteps, it’s still a good show, so spread the word and get people watching. Don’t let Krypton explode again…)