This was pretty much a Clifford and Marlize DeVoe-free episode. Marlize left her husband last week, so I’m guessing he spent this episode licking his wounds. And she’s probably floating around in that chair somewhere enjoying her freedom. But wherever they were, they weren’t in this episode. It was more about Amunet Black, the Meta-human that can control supercharged metal shards. Team Flash decides to partner with her, so she can use those shards to bring down the satellites that DeVoe is planning to launch. But the problem is this; Amunet is a villain, not a hero.

A bigger problem is that Harry is losing his mind, literally. He’s getting dumber by the day. That’s why different versions of Harry, from different Earths, show up to help him out. But it may be a case of; too little, too late. Because all the Harrisons come up with is a touchy-feely cliché about thinking with your heart. But who knows, if Harry can figure out to apply those words of wisdom to the DeVoe situation, and his own, maybe some good will come from it.

Caitlin has a problem too: How to bring back Killer Frost? And she believes that by convincing the team to work with Amunet, she can kill two birds with one stone. Amunet can help fight DeVoe, AND she can use some of her tech to coax Killer Frost out of hiding. But she doesn’t tell the rest of the team about her personal motives for the Amunet team-up. Why? Because keeping secrets from the team is an often-used strategy that never seems to work. So by episode’s end, Caitlin has to come clean about her ulterior motive, and surprise, nobody really cared. 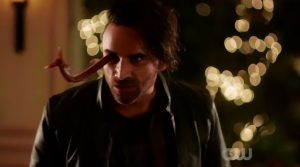 As I said, Amunet Black is a villain not a hero, so she won’t stick around to fight Clifford DeVoe. But she likes Caitlin, so after a scuffle with a former snake-eyed associate,  she gives Caitlin a small bomb that’s made out of her special shards. Caitlin can use it against DeVoe. But there’s a catch; you can only use the shrapnel bomb once and there are at least five satellites. Amunet also gave Caitlin the same kind of sage advice the Harrisons gave Harry. The answer she’s looking for will come from within.  Then the shard lady is out, hopefully for the rest of the season. Amunet is a bit tiresome.

So in the end, Team Flash gets a bomb the size of a tennis ball, and some advice. Hopefully next week will bring more of the actual DeVoe storyline, so we can finally put that to rest. And lastly, Iris published a blog about The Thinker and his Master Plan, and now the entire city knows what’s at stake. So now, if DeVoe can’t be stopped and everyone wakes up stupid one day soon, at least they’ll know why.

LAST WORDS: The end is near folks and I’m hoping for a happy-ish ending to this whole Thinker scenario. The producer’s mentioned an Inception-like finale. So maybe our heroes somehow end up inside DeVoe’s head. That way they can free Ralph and bring down DeVoe. And I’d also like to see Killer Frost return, maybe with a new name and costume. Because she’s not a killer, that was the evil Killer Frost of Earth-2. Our Killer Frost is just a more badass version of Caitlin… And who is the strange new speedster that’s been shadowing Team Flash? And how does she fit into next season’s storyline? … What about CeCile’s baby? And will Kid Flash return? Finger’s crossed y’all!!!