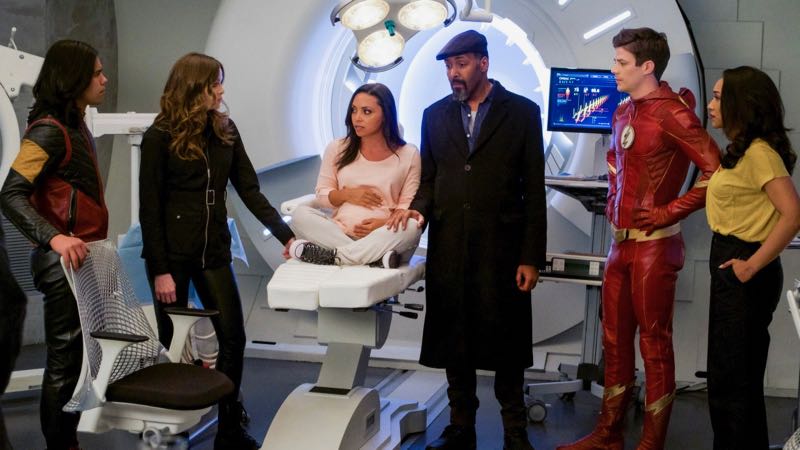 THE FLASH Finale: No Mo DeVoe

Whew! That was close. Marlize joins up with Team Flash just in time to bring down The Thinker. She has pretty much come to realize that her beloved husband is dead, replaced by the evil dark matter being that calls himself The Thinker. And Marlize comes up with a pretty out-there plan of attack.  According to Marlize, the only way for Barry to stop the enlightenment is to enter The Thinker’s mind.  And he has to rekindle that spark of goodness that was the original Clifford DeVoe. And he’s only got about an hour to get it done before the enlightenment turns everyone into mindless drones.  No pressure!

But how can Barry ‘Inception’ The Thinker? Transferring his consciousness into someone else’s brain is not one of Barry’s powers. But it is in tune with Cecile’s new powers. I called this last week. Using Cecile’s telepathy, along with the floating chair tech, they are able to transfer The Flash into The Thinker’s mind. But now The Flash has to track down the original Clifford DeVoe, and that ain’t easy. The Thinker knows that Barry is in his head, and he’s intent on stopping him. And to make matters worse, DeVoe is hunting down Team Flash in the real world, to kill pregnant Cecile, so the clock is ticking.

But Barry’s got help. He runs into his old pal Ralph, who’s consciousness is still ratting around in The Thinker’s brain. That’s because The Thinker is actually still Ralph. He’s just using Ralph’s ability to make himself look like The Thinker. So Ralph and Barry have an emotional reconnect, then they team up to find the good version of Clifford DeVoe. But that turns out to be a literal dead end, because the good version of Clifford DeVoe is dead, leaving only the Evil Thinker. So what are two heroes supposed to do now?

Meanwhile, in the real world; The Thinker finds Team Flash, and with the Flash’s body in limbo, he easily dispatches them. Then he goes to kill Cecile, so that Barry will be trapped inside The Thinker’s mind permanently. Giving The Thinker access to Barry’s powers and the speed force. This was his plan all along. But the one thing the Thinker didn’t bank on was Ralph’s tenacity.  So if Barry can help Ralph regain control of his body, The Thinker will become less of a threat, and more like a bad memory. 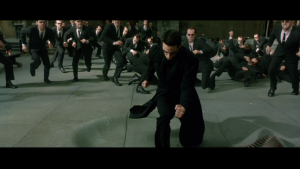 Now here’s where it went from ‘Inception’ to ‘The Matrix’. Hundreds of evil DeVoes swarm our heroes to stop them. So Barry and Ralph fight them, the way Neo Fought the multiples of Agent Smith in The Matrix. And it is an epic battle that you should check out if you can.

Our heroes win, of course. Barry emerges from his inception coma, and Ralph becomes himself again, which means pregnant Cecile is saved. But The Thinker has one last trick up his sleeve.  He transfers his consciousness from Ralph into his floaty chair.  But Marlize pulls the plug on him, shutting down The Thinker forever.

But hold up y’all!  Before Team Flash can go get their celebration on, they have to stop a falling satellite from crashing Central City. The Thinker was controlling it with his powers, but now that he’s gone, it’s dropping out of orbit and headed right for them. But luckily, Central City has The Flash.  Barry speeds off to stop the satellite with a super speed punch, which will most likely destroy the satellite, and kill Barry as well. After all, self-sacrifice is Barry ALlen’s middle name.  But when The Flash throws the punch, time stops and rewinds. Then when time resumes, another speedster is there to help Barry. They stop the satellite, save the city, and Barry survives But who is this mysterious other speedster? Hint: It ain’t Wally!

Cecile gives birth; it’s a girl. And Team Flash can finally celebrate! Marlize goes off to use her tech skills to help third world nations. That was her original dream before she met Clifford DeVoe. And Ralph is back with his Flash family, but he’s not the only one. Wally West shows up to celebrate as well. He was off killing a demon with the Legends. But now he’s back, and Wally finally feels like he’s found himself.   But is he going to be back on Team Flash, or will he return to the Legends? That’s still not clear.

And what about that second speedster that helped destroy the killer satellite and saved Barry’s life? It turns out to be the mystery girl we first met at Barry and Iris’s wedding. She arrives and tells the gang that she’s from the future. She’s Nora Allen, Barry and Iris’ daughter, and she thinks she may have done something really bad… And that’s where it ends. All-in-all: A GREAT FINALE!!!!

LAST WORDS: Marlize helps the team restore Harry’s diminished brain, and he’s back and fully functional. But the catch is that he’s no longer a super genius.  Which surprise, Harry is okay with. He’s grateful for the restoration of his memories and functionality. And Harry, minus his genius intellect, heads back to Earth-2 to see his beloved daughter Jessie Quick… But I’m sure Harry, or a new version of Wells, will be back next season…

Also, during the melee, Cecile channels Caitlin’s memories mentioning a guy named Thomas, possibly giving us a clue about Killer Frost. Caitlin could have inherited her frost power from her Dad, named Thomas. But we’ll have to wait and see… And as for Nora Allen; I think that by rolling back time to save Barry, she may have caused her own Flash-Time paradox. But again, it’s another wait-and-see situation. But I’ll be at Comic-Con again this year, so if I hear something, you’ll hear something. Stay tuned!!!