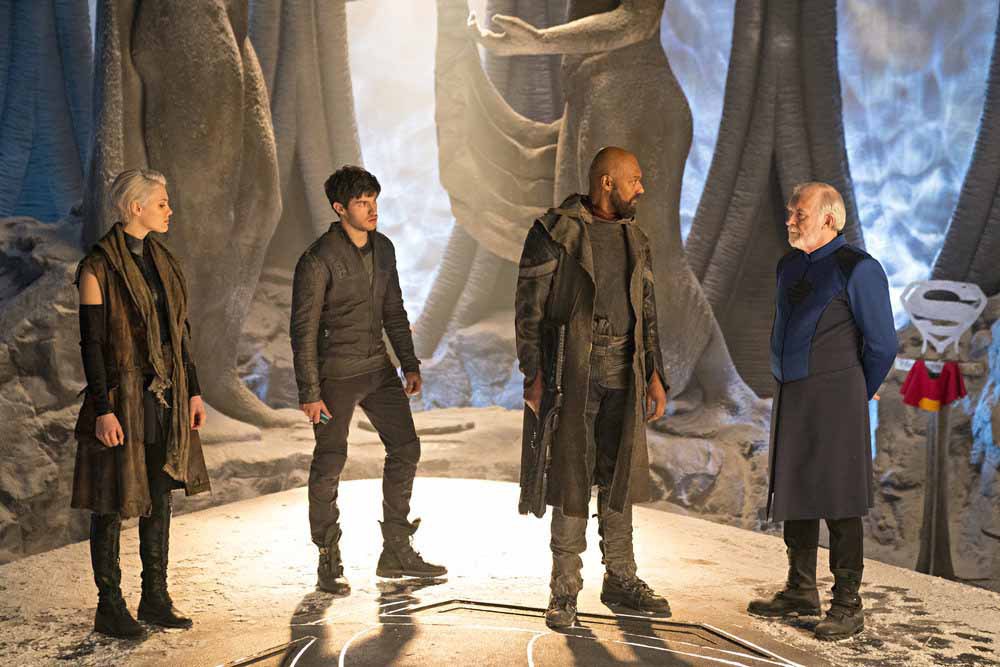 Wow! And here I thought Gotham was the worst when it comes to messing around with Comic Book continuity. But I guess anything goes in this supposed prequel. Check it out: Brainiac doesn’t take Kandor, and instead, he ends up imprisoned in the phantom zone with Seg-el, our hero.  Then General Zod takes over Krypton, conquers other alien worlds, and then erects tribute statues of himself. Yeah, that just happened.  And Superman’s cape loses the iconic “S” as it transforms into the Zod insignia. (No more Hope everybody)  So I guess, in this reality, there’s a Super-Zod on Earth, probably ruling it.  Bummer! I hope Lois doesn’t fall in love with that guy.

That’s one heck of a cliffhanger. And where is Adam Strange? From the look to things, he’s in present day Metropolis. And Brainiac has frozen the city and has it bottled-up aboard his ship. But how did that happen if Brainiac was trapped in the phantom zone over two hundred years ago? -Remember that Krypton takes place in the past – Yet there are taxi cabs and street lights in Metropolis, so it didn’t get scooped up in the way-back-when. So what’s going on? My head is spinning. I thought questions would be answered, and maybe some lose ends tied up. Instead, we got a ton more questions, and a narrative that no longer makes sense.

Meanwhile; Jayna-Zod is nowhere to be seen this episode, and is probably still being nursed back to health by her estranged brother. Kym, and all the other rankles, have been forced to join General Zod’s new army. Nyssa goes to the genesis chamber and gets the embryo of her child with Seg. Taking it away in a high-tech doggy-bag. But not before learning that she is actual a clone of the original Nyssa. Yeah that just happened. Nyssa is a clone y’all. And if there is a why, things won’t be explained until next season, if we’re lucky.

Also, Val- el is alive! He’s Seg-el’s grandfather, the one that was forced to walk the plank in the first episode. Turns out he didn’t die; he faked his own death by jumping into the phantom zone. Yeah, that just happened. That’s where he met General Zod, because somehow in the phantom zone there is no past, present, or future. But Zod betrayed Val-el and stole the device that would have freed Val from the phantom zone. That’s how Zod time traveled to Kandor. But General Zod eventually frees Val-el because he needs his help. So I guess he thinks it’s a better-late-then-ever scenario.

And then Dev-em wakes up from a coma and finds that he has a robot arm. Yeah, that just happened, he’s bionic now.  Lyta shot his real arm off when Dev-em tried to kill her. But they’re all cool with each other now. And Lyta and Dev-em reluctantly support General Zod, now that he’s taken over Krypton. What else can they do, Lyta is Zod’s mom after all.   But don’t think about that too hard, because now that Seg is trapped in the phantom zone, how could he have a kid with Lyta? And if Lyta and Seg don’t have baby Zod, then how does General Zod still exist? Shouldn’t he evaporate like Superman’s cape was doing?

My theory is that when General Zod came back in time, he splintered reality, creating a parallel universe where anything is possible. And I think that was Zod’s plan all along. Because he wasn’t too concerned about trying to kill his grandmother Jayna, or sacrificing his grandfather Val-el to Brainiac, or saving his father Seg-el from the phantom zone. All said and done, he must have been pretty confident that his existence was assured. And now that Zod’s large and in charge, he’s like an intergalactic dictator. Yeah, that just happened. So I’m guessing that he’ll be the big bad next season. Well played General Zod.

LAST WORDS: The whole splintered reality-thing has been done before. They did it when they rebooted Star Trek, so they wouldn’t be tied to established Star Trek lore. And they did it on The Flash a few seasons ago, when Barry went back in time and stopped his mom from being killed. He created an alternate reality they named Flashpoint. So if that’s what they’re doing on Krypton, it’s not unheard of…

So what have we got? Will Seg-el escape from the phantom zone, with or without Brainiac? What’s up with Seg and clone-Nyssa’s kid? Will Adam Strange escape Metropolis? Will Jayna, Lyta, and Dev-em, overthrow General Zod, or at least try to? Will Superman ever be born. And oh yeah, DOOMSDAY JUST BROKE FREE! Yeah, that just happened. So will Doomsday rampage and destroy absolutely everything? Stay tuned. If I hear anything at Comic-Con you’ll be the first to know.