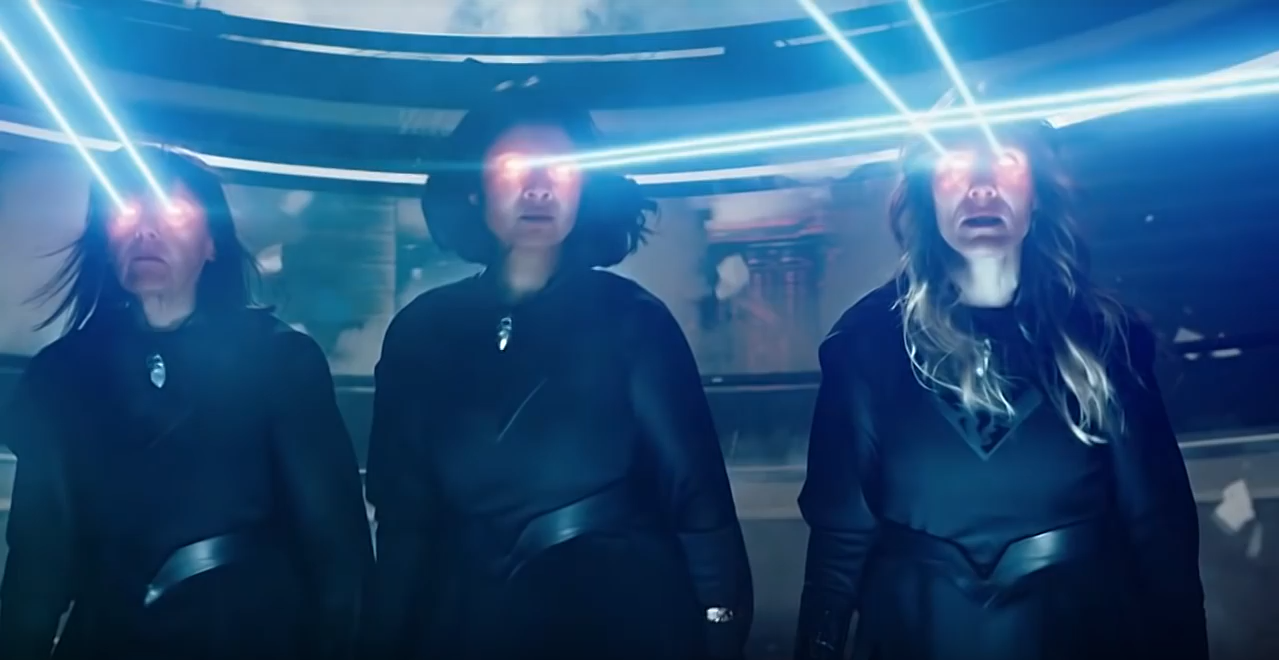 Remember how Supergirl stopped Reign last episode with a Kryptonian rock that wasn’t Kryptonite. Well this week is all about the resurrection of Reign. The World Killer was yanked out of Sam and floated off into oblivion. But with the finale still looming, it’s no surprise that bad girl Reign makes it back in time for the final showdown. Her name is in the title of the episode after all.

So how does Reign come back, separate from Sam? Well thank three Kryptonian Witches for pulling off that magical miracle. And yes, in the episode they are called witches. Krypton apparently had witches and magic, along with their advanced technology. Who knew? I swear that sometimes this series seems to be making things up as they go along. Which is a little nicer than saying it’s just poorly written.

Supergirl and Mon-el are stuck out in space, in Argo City, because the Witches stole their space ship, which is actually Hank’s modified car. I guess their broomsticks weren’t equipped for space travel. They attack the D.E.O., because they need the blood of the two dead World Killers for their resurrection spell. And Agent Demos gets killed, much to Winn’s dismay. Demos never had much screen time, unfortunately, but he was supposedly Winn’s friend. So he will be missed.

And here’s another example of how Jenky the writing is; James is on his way to Catco to warn the city about the murderous Kryptonain Witches, and their evil scheme. But he detours from that to go comfort Winn, who’s all busted up about Demos’ death. I guess that was supposed to show how deeply James cares for Winn, but instead it just shows how screwed up James’ priorities are. Winn is in no physical danger; he’s upset. While on the other hand, the rest of the City is about to have a resurrected World Killer dropped in their laps.

Also, remember how Reign said her mission was to cleanse the Earth of Evil? Well apparently that all changed. Now Reign’s mission is to destroy all life on Earth. Changing the planet so that the Kryptonians of Argo City can move in and ‘feng shui’ it the way they want. Wait! Wasn’t that the plot of the Man Of Steel Movie? See what I mean about the writers making thing up as they go along. And speaking of Superman; where the hell is he? They act like he doesn’t exist! Even though he’s was actually on the show last season.

Supergirl, Mon-el transport back to Earth, and they bring Supergirl’s Mom Alura with them. I guess she’s going to be part of the super-powered melee in next week’s finale. Hank and his terminally ill Dad are back too. They spent most of the episode saying their goodbyes by downloading Dad’s memories into Hank’s head. It’s a Martian thing. And Sam is headed back to the Dark Valley to confront Reign there, in her subconscious. Or is it a real place now? Your guess is as good as mine. So stay tuned, if you want to wade through the muck see how it all plays out.

LAST WORDS: The Supergirl series is in need of a real make-over, starting with the creative team. I wasn’t a huge fan of the show when it debuted on CBS, but at least it had a vision back then, and seemed to know where it was going. But nowadays, it feels like the show is confused and aimless, and it doesn’t even play by it’s own rules. Like when Alura thanks Alex and her family for taking Supergirl in, right in front of Lena. How does Lena still not know that Kara and Supergirl are the same person? She’s supposed to be a super genius for Gosh sakes!