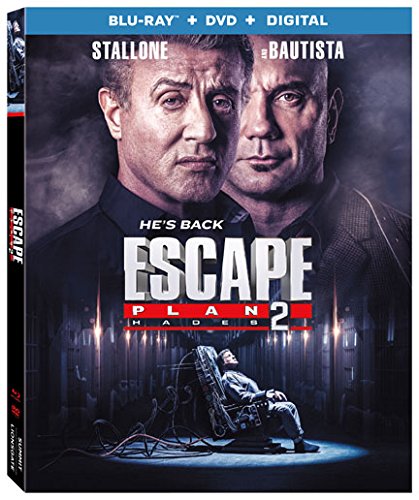 I’m excited Stallone is continuing the Escape Plan series and bringing Dave Bautista in. They’re making it more about the Breslin Security team, but Stallone is still in it, doing some action on the outside and joining the team for the finale. I mean, it beats doing Escape Plan without Stallone at all.

The Blu Ray has the modern digital look of a theatrical feature. It’s largely filtered greenish blue which works for the prison Hades. Establishing shots of Thailand ground it with an international feel and even the “Thailand” created in Atlanta looks like comparable films shot on location. Plus, there’s tons of grime and sweat.

Stallone is not in the bonus features but everyone else sure has nice things to say about him. They also address the Chinese audience which is pretty much why this sequel exists. There’s 54 minutes of individual interviews if you really want to get in depth on Escape Plan 2. Some of the sound bites appear in the featurettes but that’s still over 30 minutes of all new quotes. Bautista particular had a lot more to say than made it into the behind the scenes cuts.

Director Steven C. Miller says “if there’s a part three.” There already is. Guess they didn’t shoot back to back. Or maybe they didn’t tell Miller someone else was directing it! Bautista too talks about three as hypothetical. I’ll be here when it comes out.