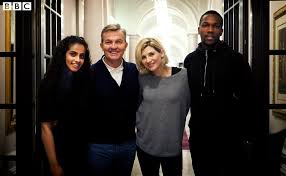 Yes, the new Doctor is a woman, but that’s not all the ‘new’ that there is. There’s a new showrunner named Chris Chibnall, and he’s also the show’s Executive Producer, along with Matt Strevens. And the Doctor travels with three new friends. Don’t call them companions. That sounds way too stuffy and dated. Tosin Cole plays “Ryan”, Mandip Gill plays “Yasmin” and Bradley Walsh will play “Graham”. And, for the first time ever, a woman, Jodie Whitaker, will play “The Doctor”.

A female Doctor, yes that is a big 1st, but here’s another one: For the 1st time in the show’s 55-year history, the show will have writers of color penning episodes of Doctor Who. And, as a writer of color myself, I was very surprised and disheartened by the show’s lack on inclusion to this point. It is 2018 after all. And to further put your minds at ease; they do have two female writers working on the show as well. 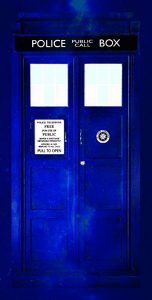 While we did get a chance to meet the Doctor and her friends at San Diego Comic-Con, we didn’t actually learn that much about the new Season. The cast, and executive producers, were pretty careful not to let an spoilers slip. They wouldn’t even confirm that The Tardis would be back. After all, it did explode after The Doctor’s regeneration. But long term fans know that The Doctor’s Tardis goes through a make-over, so have no fear, I’m sure the Tardis will return.

Though the same old Who monsters and villains wont be returning; so don’t go looking for Cybermen, Weaping Angels, or Daleks, not this first season anyway. As the creative staff did confirm that the new Doctor will be facing off against all new creations. Which is a good thing. I can definitely do without hearing ‘EXTERMINATE’ screeched at me for the Umpteenth time.

So in short; we have a brand new Doctor, brand new friends, and brand new adventures. Who can ask for anything more?