PEOPLE OF EARTH is a quirky summertime comedy about alien abduction on TBS.  Or at least is was.  After ending on a huge cliffhanger last year, the show was renewed by TBS for a third season.  YEAH! There’s nothing worse than when your favorite TV show ends with a cliffhanger and then gets cancelled.  But there’s no chance of that right, because TBS renewed it.  But wait, then if it’s summertime, why isn’t it back on yet?  You guessed it, or read the title of this article; TBS changed their minds and cancelled the show!  What, What! 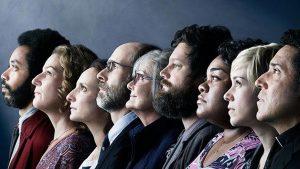 Creator of the show, David Jenkins, told fans that Season 3 of the single-camera comedy, from Conan O’Brien’s Conaco and Warner Horizon Television, had already been written.  But Alas, the plug has been pulled. People Of Earth was a smartly written half-hour show that revolved around a group of alien abductees – or “experiencers” – living in the small town of Beacon, NY.  And at the end of last season, all of the main characters had been taken captive on the alien ship, by an evil alien intent on world domination!  And, and……  I guess, thanks to TBS, the aliens won.  Because now we will never know what happened to our beloved experiencers, or why we’re now serving alien overlords.  THANKS FOR NOTHING TBS!

1st Dirk Gentley gets cancelled and now People of Earth.  When did creativity become a bad thing?