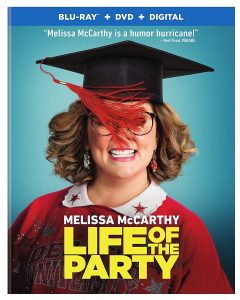 Life of the Party was a big surprise to me. I thought it would just be a mother/daughter Back to School riff, which would have been fine, but it is so much more. It’s less about the embarrassment of having your mom in college or the party animal she becomes and more about empowering soon-to-be graduates and empty nest mothers for the future. And it’s really funny.

Visually, the Life of the Party doesn’t do much more on Blu-ray than just look clear and sharp, like a modern day movie would. It’s a beautiful campus, but not the sort of visual marvel that other big movies are. The ‘80s party is a flashy glittering scene that really pops on Blu-ray.

More importantly, there are 46 minutes of deleted scenes! There’s a whole scene with Ben Falcone’s Uber driver. Melissa McCarthy does some physical bits that are worth seeing. There are different improvs or extended takes of scenes like racquetball, classroom banter,

There’s more of the ‘80s dance, a very empowering defense of the walk of shame, another take of the dinner reveal scene with equally effective inflections, more runs at the pot party, even extended Christina Aguilera improv! McCarthy mispronouncing “on fleek” seems like a joke for me personally.

Various line-o-ramas give a few more alternates in rapid succession. The bonus features are very short. They pick out the 80s party and the parents based on McCarthy’s real parents to spotlight. The latter is a nice peek at how real life comedy ends up lovingly in her movies.

But Life of the Party isn’t the kind of Blu-ray you buy for a film school deep dive. You buy it to laugh, and the movie itself delivers while the extras show how much gold they even left behind to cull the final cut.