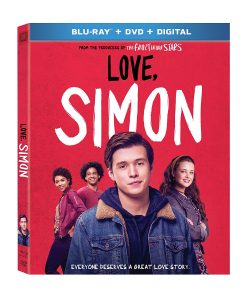 Love, Simon is a high school comedy so the visuals are mostly campus, suburban home and parties. As familiar locations go they are all polished, glamorous and vibrant Hollywood versions that shine on Blu-ray. The picture is sharp and clear since it’s a brand new movie.

But of course you’re not buying Love, Simon for a home theater demo. Love, Simon is a breakthrough because it is a mainstream Hollywood high school rom-com about a gay teenager. The bonus features complement the significance of that lovingly.

The most significant deleted scene is Simon (Nick Robinson) going to a gay club, which is obviously not the most comfortable place for a teenage who’s just coming out. The following scene with his parents is poignant too.

Director Greg Berlanti gives a sincere comedy with some personal touches and a lot of pertinent information about adaptation and production. Co-writer Isaac Aptaker and producer Isaac Klausner help keep the commentary moving throughout the film.

Behind the scenes features are basic 10 minute spots but give the actors a chance to talk about the film and their roles. Both the state of Georgia and the city of Atlanta get brief spots. They do their best to show how significant the locations were to the film but there’s no hiding they’re promo pieces for the cities.