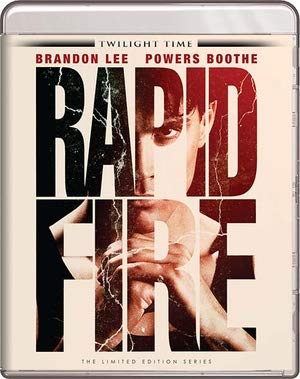 I’m very glad to see Rapid Fire on Blu-ray. This Brandon Lee vehicle made me admire him as my new action hero. I had seen Showdown in Little Tokyo in which he was a great sidekick in Dolph Lundgren’s vehicle and sadly his subsequent movie was his last due to tragic negligence on the set of The Crow. So Rapid Fire is one of the only movies of Lee’s we have to cherish.

Twilight Time did a great job with this Blu-ray. It looks sharp and clear, but you can see the film grain which I haven’t seen since I saw Rapid Fire opening night, August 21, 1992. There are a few scenes with digital noise but it’s overall solid. The Chicago locations look gritty and overcast like the tough gangster territory of the city the film portrays.

The vintage bonus features from the DVD are here but there is a new audio commentary with composer Christopher Young. I’m glad to hear the composer of a generic martial arts vehicle get a chance to go in depth the way usually only John Williams or maybe Michael Giacchino get to on big blockbusters. Rapid Fire is a score I like. The music in the fight scenes is memorable and I have it on my movie score mix.

The commentary serves as an autobiography for Young and a step by step how to on film composing. Young only talks about Lee in terms of meeting him at a screening. That’s not the focus of his discussion. He’s got cool stories about Spider-Man 2 and Bat 21 with mentions of Hellraiser, Murder at 1600, Shipping News and The Gift but nothing specific about Hard Rain unfortunately.