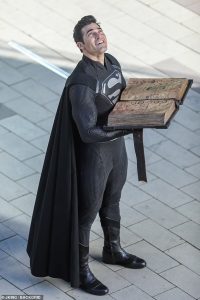 Yes, Superman is going to be  in the CW Crossover.  And at some point, he will be wearing this black suit, and reading this bigger-than-life book.  But we don’t know why, and we probably won’t know why, until we watch the crossover.  But this was the first super clear picture I ran across of Tyler Hoechlin in the black suit, so I thought I’d share it. There’s also a persistent rumor going around that the crossover my be a springboard for a CW Superman series, but that rumor has pretty much been debunked.  Though nothing is impossible.  But for now Superman fans, the CW Crossover will have to be enough.