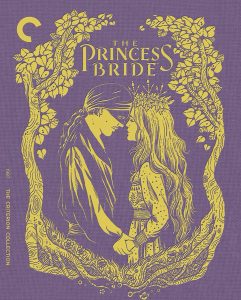 It’s always special to me when a movie I grew up with is in the Criterion Collection. Growing up, I always saw The Criterion Collection as that special prestige for movies before my time. Then films like Robocop, Silence of the Lambs and The Rock began being added. The Princess Bride was part of Criterion way back in the Laserdisc days, but the new Blu-ray release has updated the film and bonus features.

It probably depends on your TV, but on my Panasonic plasma, this new 4K restoration is a tiny step down from the 20th Century Fox Blu-ray release. Neither are perfect but the Fox one looks clearer on my set. If this is your first Princess Bride Blu-ray, the Criterion transfer certainly embodies HD, but digital noise is a little more prominent.

There’ve been no shortage of Princess Bride DVDs and Blu-rays since the Criterion laserdisc, so all of those bonus features have been preserved. At this point you can compare archival materials, DVD era retrospectives and 20-25th anniversary pieces.

New stuff includes a 17 minute feature dissecting the screenplay and the ways in which William Goldman adhered to and broke traditional structure. Another six minute piece is on a tapestry Goldman owns depicting scenes from the movie. You can see the detail of the weaving in HD.

2012 is still relatively new for Rob Reiner, Cary Elwes and Robin Wright’s 25th anniversary look back at the film. They happen to be shooting in producer Dawn Steel’s old office, and to think about the versions of The Princess Bride that almost got made with other screen legends is fascinating.