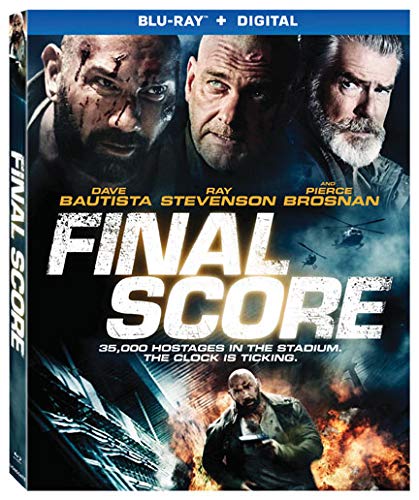 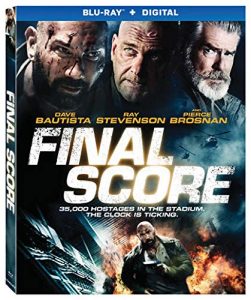 Dave Bautista makes a great action hero, but so far the only true vehicle for him has been Final Score. This Die Hard in a stadium (and therefore Sudden Death with soccer) is the kind of solid high concept action movie we need more of.

Final Score is your classic story of a veteran (Bautista) who takes his niece (Lara Peake) to a soccer game when terrorists take over the stadium. They jam the gates so there’s no evacuation, so the action hero has to stop them to save his niece, and incidentally thousands of others.

Final Score uses all aspects of the stadium for action. An elevator fight is a little shaky but it’s coherent. There’s nowhere else for the camera to go really. There is a bad guy (Martyn Ford) even bigger than Bautista he has to fight.

There are some unique stunts in the open soccer stadium that weren’t available to enclosed hockey arena. They crashed a helicopter, this jumps a motorcycle and swings on banners.

And it’s bloody AF if you miss R rated action movies.  In a kitchen fight, fingers get chopped off.

Pierce Brosnan is really a cameo. He’s the maguffin the terrorists are after so he doesn’t show up until the end, but it’s Bautista’s movie anyway.

On Blu-Ray, Final Score looks as good as any theatrical movie. Technology is the great equalizer, so you can enjoy the explosive stadium antics as bright and clearly as a studio blockbuster. The stadium looks gorgeous.

The 7 minute behind the scenes shows how they did a lot of the stadium filming.The commentary reveals scene by scene details, and development details like Bautista almost played an amputee until they found out The Rock was doing that in Skyscraper.