WOW!  The Elseworlds wrap-up was more of a super cool beginning than an end. Turns out this crossover was a prelude to a much bigger story. And they announce, at the end of the episode, that they are doing a bigger CRISIS ON INFINITE EARTHS crossover next fall.  What the hey!? Yeah I said next FALL. So for all we know, the big crisis storyline could kick off the new CW Superhero season.

In DC Comics, ‘The Crisis On Infinite Earths’ storyline involves an all-out war with a god-like being called the Anti-Monitor. And the end result is that the Multi-verse is compressed into one single Universe. And if that happens on the CW, there would be no more multiple Earths, there would just be the one. So Supergirl and Superman would exist on the same Earth as Green Arrow and The Flash  (And Possibly Black Lightning).

HERE’S WHAT HAPPENED:   The bad guy used the Book Of Destiny to turn himself into Black-Suit-Superman.  And then he takes over reality.  (Pretty much like what happened in Bruce Wayne’s dream/vision in the ‘Batman v Superman’ film.)  Black-Suit-Superman has an army of followers, and they all hang out at the Fortress Of Solitude, which is Star Labs.  That’s where the Book Of Destiny is hidden and Kara is locked up.  Barry and Oliver find Cisco, and he breaches them all to Lois and Clark. Superman joins the fight.  And they defeat Black-Suit-Superman.  But here’s the twist; they find out from The Monitor that this has all been a test.  And that the bigger crisis is coming. What, what!! 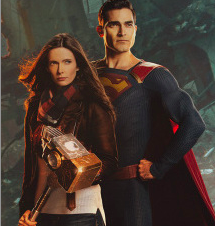 But besides being the beginning of a bigger story;  was the crossover a backdoor pilot for a new Superman Series? I say, YES! Lois and Clark are having a baby, conceived during their trip to Argo, which has an artificial red sun. Clark didn’t have powers there.  And now they are going back to Argo to have the child, because it’s safer for Lois.  So now, when things go bad on ‘Supergirl’, no one will wonder why Superman doesn’t come help Kara.  Superman also proposed to Lois, falling in line with their comic book counterparts, who are married and have a super son named Jonathan. Yep, this whole scenario just screams backdoor pilot to me.

Superman, Lois, and baby Jonathan, will probably be back in time for the ‘Crisis On Infinite Earths’ storyline.  Since, in the comics,  Superman plays a big part in that story.  Then Superman and Lois could springboard into their own series, raising their super son on the Kent Farm.  So what do you think about the upcoming crisis storyline, AND a possible Superman series?