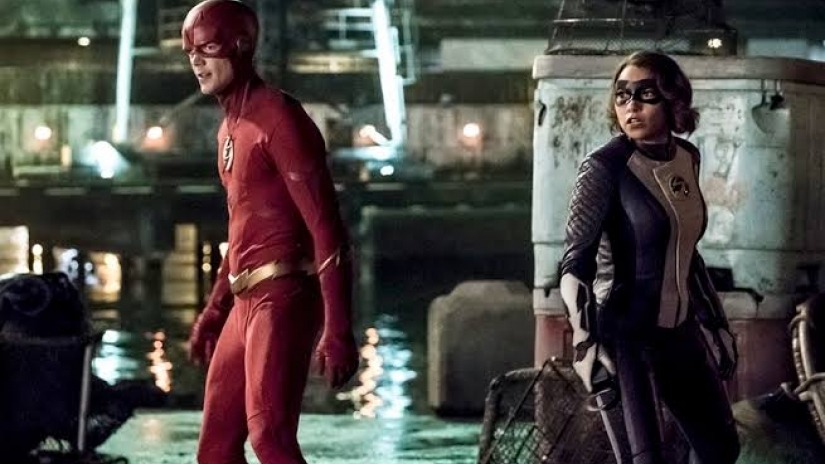 Why would Nora trust The Reverse Flash after everything he’s done? He did kill her grandmother after all.  Well this episode answers that question.  It’s all about second chances, even for super villains.  Nora even asks Barry straight-up if he thinks that the Reverse Flash could change, redeeming himself.  And Barry says yeah, maybe someday in the future.  But what Barry doesn’t know is that Nora wasn’t asking hypothetically. She’s actually been working with the Reverse Flash, in the future. Hoping that he’s a changed man.

I enjoyed this episode, even though The Flash spent most of it cooling his jets in the pipeline pokey, healing from an earlier attack injury. So this was the Nora-show. And Nora learns a thing or two from the Weather Witch, who is earnestly trying to atone for her past crimes.  But a meta-tech car thief springs the Weather Witch from jail, against her will, and uses her abilities to  boost a high-tech car from ARGUS. So the old saying applies here; Every time she tries to quit, they pull her back in.

Meanwhile, Cisco is trying to find a way to cure meta-humans, eliminating their powers.  And this pisses off Killer Frost, who takes that as a personal affront.  But Cisco and Frost come to an agreement.  Caitlin will help him perfect a cure, but nobody will be forced to take it, unless that’s what they want to do.  – But I wonder if they’ll change that rule when Caitlin’s Dad comes back.

Because Caitlin’s Dad is the Evil Icicle. And he might not want to lose his powers, which would mean losing himself.  His alter-ego, Caitlin’s Dad, can only regain his humanity if Icicle is forced to take the cure, which will banish him forever.  AND, if the police get wind of a meta-cure, they’ll probably want to use it on their meta-prisoners regardless of consent.

And lastly,  I’m patting myself on the back, because I called it.  They finally acknowledged that Detective Joe West isn’t around.  (The actor had to take time off to nurse a back injury) And tonight they revealed, just like I predicted, that Joe West, and the baby, are off visiting Wally West.

Here’s the promo for next week…