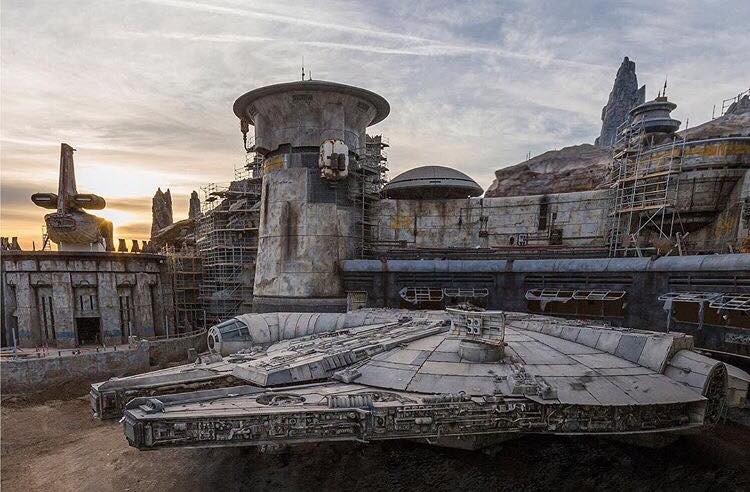 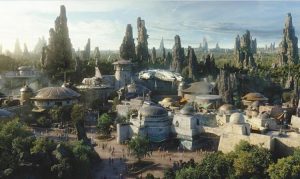 The great Willy Wonka once said, “The suspense is killing me. I hope it will last.”  Although I am pretty sure most west coast based Star Wars fans would prefer not to die from anxiety while we await our chance to live out a bucket list dream at the helm of the Millenium Falcon, the sentiment is certainly true that summer 2019 cannot get here fast enough!   And what about our brethren on the East coast who won’t see the setting of twin suns until Fall 2019!  For more than three years now, Disney has been routinely fueling the mass hysteria orbiting the debut of the coast-to-coast opening of Star Wars Galaxy’s Edge, which by now as we all know are new lands arriving at both Disneyland and Walt Disney World this year.  What started with rumors and leaks eventually evolved into mysterious construction sites, artist conceptions, preview videos and much more. But the vagaries surrounding the actual dates for when we will finally be able to make the jump out of light-speed into the galaxy far, far away continues to be as elusive as that time when Han, Leia, 3PO, and Chewie escaped the gaping jaws of that asteroid dwelling space slug!  Summer 2019 for Anaheim, and Fall 2019 for Orlando.  But what does any of that even mean?!  Well, last night I traded sleep for an attempt to tap into my inner Sherlock and see if I had a similar set of mad skills to deduce and identify a few helpful possibilities for what we could expect by way of potential dates in addition to how hard of a force punch our wallets are about to take.

Let’s consider what summer 2019 actually means to Disneyland. Substantiated reports from Disney have narrowed things down a bit further to confirm that we can expect for Star Wars Galaxy’s Edge to debut during the month of June. Some though have speculated that we could see an opening date happening sometime either during the weekend of June 22nd or possibly June 30th.  If you consider that Pixar Pier, which made its debut at Disney California Adventure around the same time last year, it is highly likely that a date precedence has been set in motion for a similar time frame, making either of these weekends a likely target. But Disney has box office domination on lock for most of 2019 and June 21st also happens to be the date that Toy Story 4 is scheduled to arrive in theaters. Could we actually see June 1 as opening day for SWGE at the DLR?  Then there’s the subject of soft openings which begs the question, what about the possibility of a very merry May The 4th Be With You?  For not only could that day signal an early start for Season Of The Force, celebrated throughout both the DLR and WDW, but it is a date that could be a contender for an SWGE preview event in Anaheim.  It would make perfect sense for Disney to take advantage of either utilizing May 4 or possibly even May 25 for preview events, with the latter as a commemoration of the release date of Star Wars Episode IV: A New Hope, in advance of an official opening on June 1st.

For how to decipher the Fall 2019 opening in Orlando, it’s probably not going to be all that helpful to reference the official opening date of Toy Story Land for a couple of reasons. One, both of the Pixar themed lands located in Florida and California had premiere dates occur within the same season. Another bit of speculation regarding WDW’s choice of dates for their debut of Galaxy’s Edge is that it could also occur on the last day of Fall which is in December. Know what else is happening in December 2019? Episode IX is scheduled to arrive in theaters during that same timeframe as well. But does it make sense to feed two Banthas of equal size and voracity from the same trough?  In all likelihood, SWGE could also make landfall in September to coincide with Force Friday, as an incentive to encourage additional support for what has now become a shopping holiday more closely associated with Star Wars movie releases.

May the force be with you should you suffer from any sort of agoraphobia and plan on going anywhere near the happiest place on earth during opening weekend because the flood of visitors throughout the first year run of SWGE, will more than likely swallow you up like a Dagobah swamp monster!  But there are a few alternatives to braving the all-consuming asteroid field of visitors, if you are willing to pay, because pay you will!

Option A: Buy a ticket to attend the preview event

With Pixar Pier, Disney California Adventure ever so graciously offered the truest of Dis-nerds the opportunity to experience the theme park sights and sounds of the Pixar universe with a preview event. At that time, these exclusive tickets were sold in limited quantities with a price tag of about $300 per person. Will Disney offer the same experience for a similar fee?  Yes, and no. Yes, in that a preview event will more than likely happen for Galaxy’s Edge and no in that it will probably cost more than a deluxe set of power converters from Tosche Station.  Based on the price increase we have recently seen with tickets and annual passes, it is only reasonable to assume that special event pricing will be within the stratosphere of more than $300 and could possibly reach as much as $500 per ticket.  But before you go spitting blue milk across Aunt Beru’s table in disbelief, there is a legitimate reason why this very well may be a worthwhile investment if you are a die-hard Star Wars fan and lover of all things Disney. NO. CROWDS.  That kind of head-in-the-Cloud-City theme park access doesn’t come cheap and with regard to previous Disney related theme park preview experiences, it has its perks such as complimentary food, parking, commemorative memorabilia, and special surprises.

Option B: Become a Gold Member of D23

If ever there was a time to literally become a card-carrying member of a Disney fan club, with aspirations of making it within 10 miles of the outskirts of the parking garage on opening day of Star Wars Galaxy’s Edge, then that time could be now.  Throughout the yearly duration of their membership, members of the D23 fan club are treated to an assortment of exclusive Disney sponsored special events, news and merchandise.  Last year, D23 members were given access to Pixar Pier several hours in advance of the opening of the main gates, during opening weekend at DCA.  This allowed them to experience all of the foods, rides, and attractions devoid of dreaded crowd traffic and excessive line waits.  The best part of it all?  It didn’t cost more than $75! Something similar to this could also very well be in the works for D23 members with regard to Galaxy’s Edge. WE DO NOT KNOW FOR SURE. Although I would imagine that the price point for an exclusive D23 member preview event could potentially be closer to the $100-150 range.  Right now a D23 Gold Membership is $99 plus applicable taxes and fees. However, keep in mind that if your plan to become a D23 member is to circumvent the possible price associated with Option A and/or to avoid the inevitable closing of the park once it reaches capacity on SWGE opening day, these special event tickets will more than likely be sold in limited quantities.

At the Walt Disney World Resort in Orlando, there were also a handful of soft openings occurring during the opening week of Toy Story Land. Similar to what we saw with Pixar Pier in Anaheim, limited advanced tickets were made available for visits exclusive to days designated for press, travel agents who specialized in Magic Kingdom vacations, D23 members and annual pass holders. With the success of these previous preview events, the assumption for another series of exclusive visits during the week of the WDW opening of Galaxy’s Edge is highly compelling.

Option C: Wait a year…What’s the harm in that?

Even though you may succumb to a nervous break down should the fear of missing out overwhelm you at the very suggestion of putting off a visit to Star Wars Galaxy’s Edge for twelve months, rest assured that you will live to fight the first order another day. There is definitely a valid argument for postponing your visit long enough to allow the frenzy to die down a bit.  If this is your angle you might want to consider giving yourself extra leverage by taking advantage of Magic Hour admission and enter the park a good two hours earlier than the opening of the main gates. Of course, it’s an additional fee but let’s be real here.  You cannot put a price tag on preventing the Empire from ruling the galaxy!  Unless you have crossed over to the dark side. In which case you’ll spare no expense to oppose the rebel scum!

So, for now, we are all in the same jettisoned escape pod with what we do or do not know about the opening dates concerning Star Wars Galaxy’s Edge.  But stay frosty, for your friends here at Nerd Report will provide news and updates as soon as the transmissions are received.  In the meantime let us raise our voices in unison as we herald forth in rehearsal of our Star Wars nerd battle cry once we have all had our chances to sit at the Falcon’s controls, “Punch it, Chewie!” 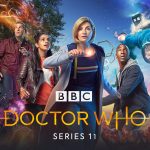 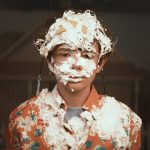