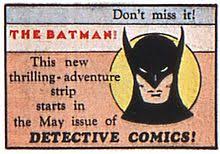 BATMAN’S going back to his roots y’all!  The sullen superhero is also supposed to be the World’s Greatest Detective.  A fact most of his films have ignored, until now.  But in the upcoming film by Writer/Director Matt Reeves,  there are plans for  a more noir Batman doing real detective work! Here’s what he had to say….

“It’s very much a point of view-driven, noir Batman tale. It’s told very squarely on his shoulders, and I hope it’s going to be a story that will be thrilling but also emotional. It’s more Batman in his detective mode than we’ve seen in the films. The comics have a history of that. He’s supposed to be the world’s greatest detective, and that’s not necessarily been a part of what the movies have been. I’d love this to be one where when we go on that journey of tracking down the criminals and trying to solve a crime, it’s going to allow his character to have an arc so that he can go through a transformation… There will be a Rogues Gallery. The casting process will begin shortly. We’re starting to put together our battle plan. I’m doing another pass on the script and we’ll begin some long-lead stuff to start developing conceptual things… We haven’t been dated. I wouldn’t commit to this, but we’re thinking the movie would probably be for 2021, late spring or summer. Warner Bros. has been incredibly supportive and given me a lot of time and shared the same passion that I do for this story.”

Sounds promising!  I just wish we didn’t have to wait so long.