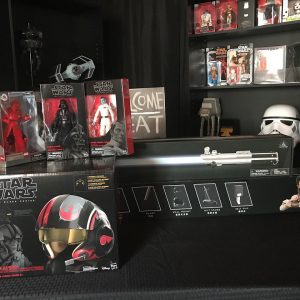 Over the last 4 years, two words have emerged, symbolizing the start of one of the greatest Star Wars fandom shopping days in the history of geeks. Force Friday!  For with this day comes a series of outstanding Star Wars toy reveals that speaks to the heart of children of all ages.  From action figures to Lego sets, to Funko Pop!, it is a powerful trove of merchandise created with the sole purpose of causing Star Wars fans around the world to lose their minds. So if you have regularly answered the call of this event upon its arrival, you could ask yourself, “What on earth could be greater than Force Friday?”  How about TRIPLE FORCE FRIDAY?!

This is no Jedi mind trick my friends! Today, Disney and Lucasfilm broke the news about the upgraded name change to one of the greatest shopping holidays in the universe scheduled to make landfall at midnight Oct. 4!  But what exactly separates this Force Friday event apart from all of the previous FFs?  Well not only will fans be celebrating the final chapter in the Skywalker saga with the release of Star Wars Episode IX this December, but upon the launch of the Disney + streaming service coming this Fall, Disney and Lucasfilm will also premiere the new highly anticipated Jon Favreau directed live-action series The Mandalorian. EA Games is also scheduled to unveil their latest gaming creation based upon the SWU with Star Wars Jedi: Fallen Order.  Fans eager to shop till they drop for all manner of gear related to a galaxy far, far, away will have their chance to collectively herald “Take my money, please!” on not one, not two, but three different varieties of galactic goodies!

In light of all the damage I’m about to do to my bank account in the coming months, I could not have picked a worse time to have dropped a spice shipment at the first sign of that Imperial Starship!