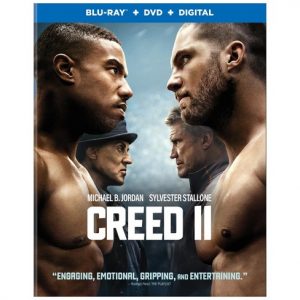 When Stallone announced that Creed II would bring back Ivan Drago, it may have seemed like it was too soon to dip back into the Rocky IV well. Adonis Creed (Michael B. Jordan) had just established his own character. He didn’t need to fight Rocky’s old battles just yet.

But it turns out we needed Creed II more than we knew. For those of us who lived through Rocky IV as children, it was the rematch we needed to see as adults. Creed II gave the Dragos real dramatic characters after being introduced as broad ‘80s villains, and Adonis and Rocky’s stories evolved along with them. This’ll be a movie we watch over and over again, just like all the Rocky movies, and it looks great on Blu-ray.

Creed II Is so clear you are in the ring with Adonis and Viktor Drago (Florian Munteanu), or the gym training with them in their montages. The ring ropes are a bright red, white and blue. Tecate should be pleased how prominent their product placement is. You can feel the cold in Philly and the heat of the dusty New Mexico training camp. The Ukraine is tinted blue as the Dragos live in that haze.

There are some flaws, digital artifacts in otherwise sharp scenes . I don’t know whether to blame the transfer or the digital photography. I’m inclined to blame the latter but I don’t remember If you could see the halos in theaters because I was too wrapped up in the story the first time.

Most of the deleted scenes are worthwhile additions to the Rocky/Creed world and I don’t think anyone would mind a movie 10 minutes longer. Spider Rico’s eulogy is another great Rocky monologue, emotional with some poignant history to the supporting character. A longer scene at Max’s cheeseteak shop gives a little more Philly flavor and taste of Adonis’s celebrity, especially with stealth cell phone photographers. Rocky teaching a boxing class is actually good advice and gives another taste of Rocky dealing with his evolving legacy. The locker room denouement gives Drago and Adonis the real conclusion we’ve been waiting for. It’s al silent but it’s in the looks.

Bonus features are a tad too short to really cover the themes they’re tackling. They mainly retell the story of Creed II as promotional pieces. Father’s and Sons only scratches the surface of what Adonis and Viktor are dealing with. Casting Viktor Drago gives Munteanu a spotlight. The Women of Creed II give Phylicia Rashad and Tessa Thompson just as much, but the longest feature is seven minutes.

The Rocky Legacy is a solid 15 minutes. Dolph Lundgren hosts it and I didn’t know he met James Brown on Rocky IV. Lundgren and Stallone reviewing their fight from that movie is a good bit of reflection.