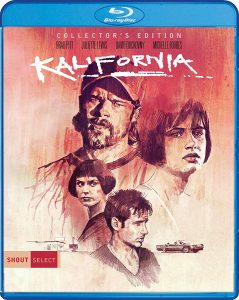 Kalifornia was not a movie I liked but disliked it in a memorable way. Weird asides like a truck stop patron peeing out of a tube and dogs humping made Kalifornia stand out. Brad Pitt certainly gave his all as an unhinged killer and Juliette Lewis as his abused girlfriend, but it was maybe too over the top.

So I was interested when Shout Factory added Kalifornia to its Shout Select series. There are certainly fans of Kalifornia (and Pitt especially), so perhaps it could uncover what it was about this movie.

The Blu-ray looks great, sharp widescreen on the road and lot’s of different locations. Drive through sunny and green farms in the open convertible, a dusty nuclear test sight, or gritty rain soaked factory and dingy motels.

The only bonus feature is a 24 minute Dominic Sena interview. He talks about the founding of Propaganda Films and goes into detail about casting all four leads. He finally explains the title with a K at the end of the interview, but gives no insight into the dogs or tube though.

I suppose including both theatrical and unrated cuts is a bonus feature too. Theatrical is actually the one I saw, in theaters. Unrated probably adds about a minute of violence. Fans of Kalifornia should be happy with this presentation and behind the scenes recollections.