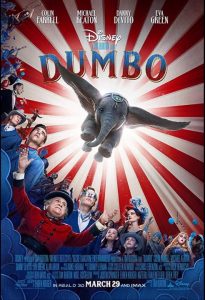 Why am I starting things off with my movie review in this way?  Well if you’ll recall I previously shared a list of traumatizing moments in Disney animated movie history in another article. Although back then, the animated version of Dumbo was missing from that list, I could have included it as an honorable mention. A baby born with a birth defect, the separation of a nursing child from their mother, and the abusive nature of animal exploitation are all key ingredients for a lively couch session with my therapist Dr. Pamela.

So having the memory of my previous encounter with the cherubic flying pachyderm was fodder for the crippling apprehension I had about watching any of this all over again in an unreal real-life setting through the eyes of Tim Burton. Hey, I’m over here trying to reserve as much emotional energy as I can for Endgame so my film selections leading up to that viewing party have to be smart choices.  I am happy to report that after having watched Dumbo I have managed to cheat death, that is, the death of my current adult version of childhood and I emerged from the movie theater feeling stronger than ever!!  Leading up to my triumphant victory, the trailers for Dumbo have certainly played devil with my heart.

The assumption for what I figured would be nothing short of a mental collapse during what appeared to be a series of heartbreaking pitfalls for our flapping-floppy-eared hero, were without merit. Instead, the story takes bits and pieces from its animated roots then creates a subplot to help it transform into something more akin to a precious bedtime story. I thought the casting choices were smart because I did not feel like any of the humans were overpowering in any way. And I liked the fact that there wasn’t this sense of overacting from any of the talent to compensate for the fact that they were all apart of something that started out as a cartoon. 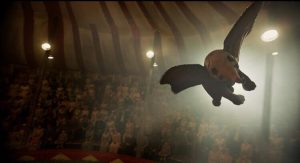 I felt like I was in the middle of a Burton-verse group hug during the reunion of Michael Keaton, Danny DeVito and of course, Danny Elfman whose brilliant soundtrack with its distinctively distinguishable whimsy was the perfect background music for the first flights of a flying baby elephant. Collin Ferrell should definitely lend his talents to more lighter fare such as Dumbo because he has such a charming way of creating sympathy. Although I would not describe his role as groundbreaking, I will say that it was nice that he did not portray the dad character in a way that would result in any post-credits resentment for single fathers. I also loved the kindness shared between the brother and sister, first between each other and then towards Dumbo.  It didn’t feel fake or strained and I really enjoyed the way they got along with each other in light of some of the challenges they faced which the characters could have used as an excuse to be obnoxious. The fact that they immediately embraced the awesome potential of Dumbo’s ears verses misjudging him with a bunch of mean spirited initial observations were, in my opinion, well-crafted qualities to instill within little kids. The CGI used to create Dumbo was also seamless. It did not feel distracting or confusing, but rather it made the audience feel like we could reach out and shake hands with his trunk. There are definitely elements within Dumbo that harken back to the tale of E.T. The Extraterrestrial and I smiled a lot as I picked up on those subtle winks. Overall I felt safe and satisfied with what I had seen on the big screen and I agree with an assessment scoring that was shared on a recent Nerd Report movie review video as delivered by our chief, so I give this movie a solid 7.5 out of 10.  It is just the right amount of sprinkled sweetness children of all ages can use the days.