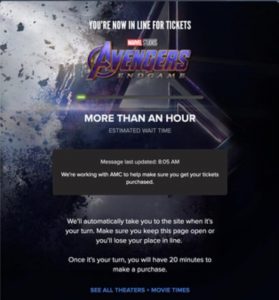 When Thanos snapped his fingers not only did he wipe out half of the population of living things in the universe, but it also appears that he broke Skynet! On Tuesday (4/2), the internet proved that it was no match for the might of the Mad Titan’s ability to draw in throngs of eager moviegoers, both geeks, and norms, as tickets for Avengers Endgame officially went up for grabs!  In what could be described as a digital Hunger Games, fans from all factions converged on the apps and websites from the likes of retailers such as Fandango, Atom, Drafthouse, Regal Theaters, Regency Theaters, AMC, IMAX, The El Capitan Theatre in Hollywood, as well as countless other smaller cinema venues throughout the US. All in the hopes of obtaining a valuable opening weekend admission for a viewing of what professional movie reviewers and couch critics alike are all predicting will go down as the highest anticipated movie in the history of film!

It is no joke that I too became swept up in the madness of an unheard of 5 am movie ticket purchasing extravaganza. When word came down from my own HQ that Tuesday (4/2) was THEEE DAY that Endgame tickets were going on sale, I immediately dialed things up to Def Con 5 because after having survived a few other Thunderdome challenges of securing tickets for geek genre event movie releases, and knowing what we all knew about the magnitude of Avengers Endgame, this was no time to be sloppy on my part. I set not one, not two, but three separate alarms to wake me up by 4 am so that I could immediately put all of my communication devices through a series of exercises to ensure their dependability. My theatre of choice as it turns out just happens to be my usual stomping ground, The El Capitan Theatre in the heart of the tourist trap sector of Hollywood CA. The theatre is enormous, historic, beautiful, and Disney owned which makes it a prime piece of entertainment real estate for a fan event that revolves around a Disney property! And the fan event that the El Capitan has in store for the fans this year is gargantuan because it consists of a 22 movie MCU marathon running for 3 full days!! Although it is not the only theater currently offering such a magnanimous movie watching experience in celebration of Marvel’s 10-year achievement, I could not imagine watching all of these movies leading up to Endgame anywhere else! The ticket buying odyssey I went on with my wallet this morning resulted in an anxiety attack brought about by what one would expect whenever the entire population of mankind decides that we all want the same thing all at the same time.

During my own personal attempt to secure safe passage into a preferred movie theater I experienced multiple dropped phone calls and frequent website freezes and/or crashes. Things got frantic and chaotic real quick after that. It felt like someone had taped my eyes open and strapped me into the world’s fastest roller coaster while I was trying to hold on to about 30 cats! I scrambled to regroup with continuous redials and web page refreshes. Out of all the telecommunications machinery I had running at full throttle this morning the only one which truly proved its worth was the archaic landline phone which I shamefully and ungratefully take for granted, as it served to be my only reliable link to assigned seating Val Halla! How I long for the days of camping out in front of the actual box-office on opening night accompanied by my squad of loyal compadres who always understood and appreciated the intricacies of line formation, where one or more of us had ticket detail while the rest of the crew guarded our placement for entering the theatre.

Needless to say, the cordless phone became the Luke Skywalker of my nerdaverse during this adventure and I was able to lock down a ticket for the fan event as well as group tickets for me and my family to watch the showing to immediately follow. Sadly, however, a countless number of my fellow comic book movie geeks were victimized by the dreaded digital snap which resulted in a multitude of heartbreaking casualties. Many fell into the abyss of online line waits for hours that at times resulted in unceremonious and involuntary website rejections. Others took the bull by the horns and acquired their tickets in person at physical theater locations, avoiding the faulty nature of the automated A.I. overlords playing judge, jury, and executioner with our nerd hearts.

At the end of the day, a majority of us managed to make it across the goal line with our quarry intact while a relative few are still engaged in a tug-of-war battle with the temperamental electronic legion of ones and zeroes temporarily holding some of the sought after movie tickets and refunds hostage. Stay strong and don’t give up.

In spite of the harrowing experience I had with gaining my Endgame tickets, the struggle seems weirdly metaphorical for the challenge that the remaining members of Team Avenger face in restoring balance to the galaxy. I only hope that when they each start taking turns smacking Thanos upside the head that one of those skull thumps is dedicated to the fans who fought the real battle for their rightful place in the audience on opening night!

I think Pat Benatar said it best when she sang that “Love Is A Battlefield” because today was truly the day that we the fans proved our love of all things Marvel.  Excelsior!