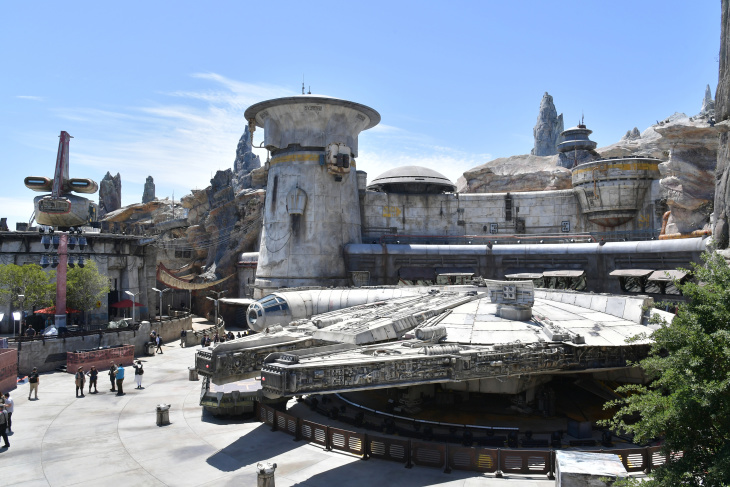 There has been a lot of press about Disneyland’s new addition; good, bad, and otherwise. So I thought I’d add my 2 cents, since D23 is just around the corner, and the new land opens in Disneyworld at the end of August.

I went to see Galaxy’s Edge just after the July 4th holiday weekend, and I was pretty amazed by it.  Disney Imagineers went above and beyond, creating ‘Black Spire Outpost’ on the planet of ‘Batuu.’  And it is pretty cool.  BUT! It is unfamiliar, and unfinished, so I can see why some fans are complaining that there isn’t enough ‘Star Wars’ in this new Star Wars based land.

Unlike the ‘ Wizarding World of Harry Potter,’ where they practically plop you down right in those movies:  There’s the Hogwarts Express, the 9-3/4 Train Station, Zonko’s Joke Shop, Olivanders, the Three Broomsticks, Hogwarts, Dumbledore’s Office, etc…  In Galaxy’s Edge they steered clear of familiar film landmarks.  Sure, there’s a life-size Millenium Falcon, and some other familiar space ships docked about. But Black Spire Outpost, intentionally, isn’t a place found in any film. Disneyland wants you to ‘have your own adventure’.

There’s a reason it isn’t called ‘Star Wars Land’.  So if you’re expecting to see Jabba’s Palace, Dagobah,  Tatooine,  Cloud City,  etc., you’re out of luck.  Unless you take a ride on ‘Star Tours’ in Tomorrow Land.  So the real question is, can you really have your own satisfying adventure in Galaxy’s Edge, without the film-inspired nostalgia?  And I say, eventually YES!

And I say eventually, because they are still working some of the kinks out. When I was there, the online interactive elements weren’t in place yet, so the cast members didn’t really interact with you as promised. I didn’t see any familiar alien characters scurrying about, or classic Vader/Luke/ Han/Lando cast members. I only saw Kylo/Rae/Chewie.  And while the Millennium Falcon ride was fun, the  land’s main attraction won’t open for months. 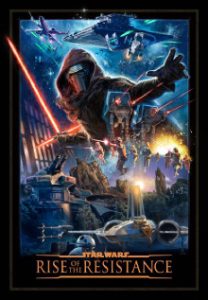 The land’s second ride, which won’t open until early 2020, is called Rise Of The Resistance. And it’s being touted, not just as the signature experience of Galaxy’s Edge, but as four attractions in one. Guests will board multiple ride vehicles, encounter enemies, and walk the halls of a Star Destroyer as if they were truly a Resistance fighter taken captive… Now that just screams Star Wars to me.  And should satisfy anyone complaining about the lack of ‘Star Wars’ at Galaxy’s edge. 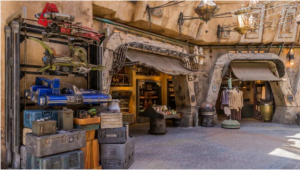 But what about right now?  Galaxy’s edge only has the one Millennium Falcon ride.  Along with shops and eateries, which are themed and cool.  But you need a reservation to get into the CANTINA, another Star Wars staple, and those go quickly. So you may get into Galaxy’s Edge, but not the Cantina. That happened to us.  And you can’t even peek into Savi’s Jedi workshop unless you pay the $200. to build a lightsaber first.

And speaking of cost, Disneyland upped their ticket price to $150. per person, for Disneyland alone (No California Adventure).  Which is a hefty price for a family on a budget, and you’re not even getting the full experience.  So ultimately it’s up to you. Do you go now, and then come back when the main ride opens? Or wait and see Batuu when everything is fully operational?

I myself planned to wait for the second attraction to open, before handing over the $150., but lucked out and scored a free pass.  So under those circumstances, I really enjoyed Black Spire Outpost.  – But attendance at Disneyland has been down since Galaxy’s Edge opened and here’s why, straight from the horse’s mouth… Disney CEO Bob Iger had to say about it.

“… people were worried that there would be massive crowds at Galaxy’s Edge, so they purposefully stayed away.” Iger noted. “In addition to that, we raised our prices, we brought our daily price up, so if you think about local visitation, we brought the price of a one-day ticket up substantially from a year ago.”

“And then we opened up Galaxy’s Edge with one attraction instead of two; the second attraction is going to open in January,” Iger explained.

“And so all of those factors contributed to attendance that was below what we would have hoped it would be. That said, guest satisfaction, interest in the attraction in the land is extremely high, it’s the most popular thing at the park…” Iger said during Disney’s Q3 FY19 earnings result webcast, according to ComicBook.com 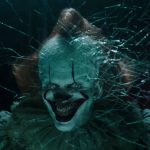 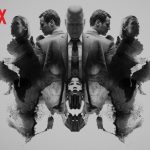