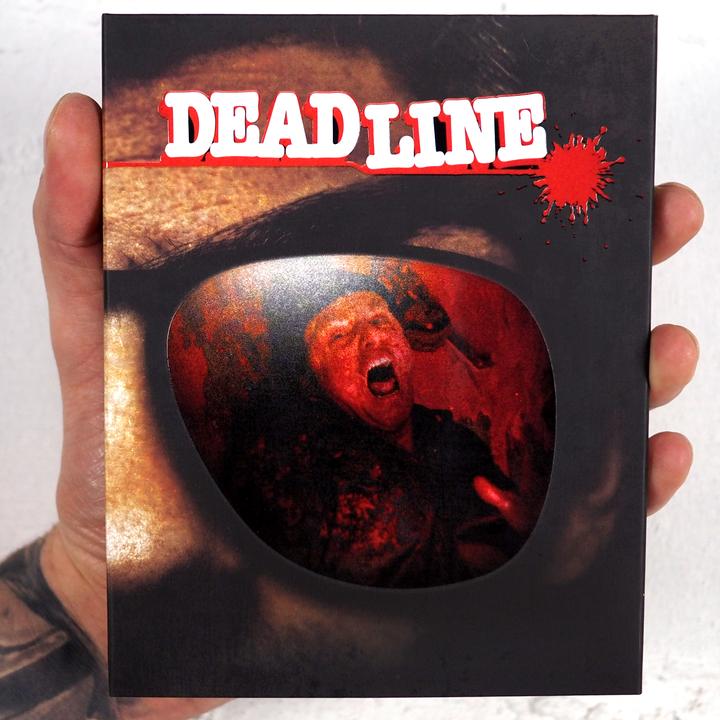 I don’t know where Vinegar Syndrome found Deadine but it is a nasty discovery. Actually it’s from Canada but I never would’ve discovered it were it not on their slate. The ‘80s were a golden age for crazy horror movies. They were easy to fund and the emerging video industry gave them an alternative to theatrical play. As such, you could discover some gems outside the mainstream.

Steven Lessey (Steven Young) is a horror author who wants to branch out into other genres. The joy of the movie is in the random gory scenes that are the stories he’s writing or has written. One is a gratuitous shower scene like a good 80s horror movie. Actually, it becomes not gratuitous and excessively bloody but still fulfills nudity quotient. There’s a real holy sh*t scene with kids and their grandmother.

Deadline reflects a common debate about horror in the ‘80s. The horror author is accused by students of perpetuating violence rather than commenting on it. Then he experiences family tragedies inspired by the movie adaptation of his book. There’s also more gratuitous nudity in a coke party.

Vinegar Syndrome found producer Henry Less and cinematographer Manfred Guthrie for interviews. Less discusses mounting the production and confirms it was a tax shelter setup, and the horror idea was most compatible. Most revealing is his rift with director Mario Azzopardi during post-production.

Guthe talks about distinguishing the horror scenes from the “reality” scenes, and he was effective. The Blu-ray presents the obscure Deadline in pristine condition. They offer some warnings about the condition of some elements, but there are hardly any of those artifacts. They just add character to the grindhouse aesthetic anyway.