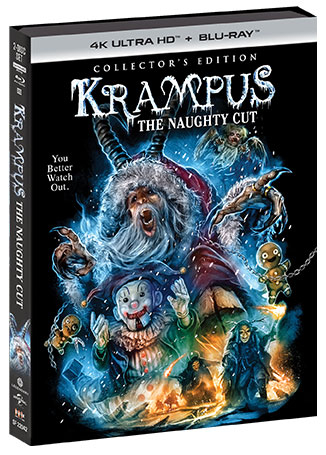 Just in time for Christmas, Scream Factory has released a new edition of Krampus. The naughty cut runs about four minutes longer, with the deleted scenes reinstated and explicit language uncensored. It doesn’t really change the film but it’s nice to have the option. Plus, it’s a 4K UHD upgrade for those with the equipment.

As is Scream/Shout! Factory’s tradition, the bonus features are thorough. Writer/director Michael Doughtery goes creature by creature in his interview, and the technical artists do the same. It can be a bit dry if you aren’t into the nitty gritty but it’s there for the studying.

The actors liven up their interview. David Koechner is really enthusiastic and self-deprecating. He covers a lot of same stuff about the soundstage neighborhood and creatures, but describes them much more vividly. He fanboys over Weta and meeting Peter Jackson, plus he’s got behind the scenes anecdotes of naughty antics.

Allison Tolman consulted with Fargo co-star Colin Hanks and captures his enthusiasm for Wellington. She’s sweet about personal sacrifices she made to make the movie. She also talks about more pranks. Even Emjay Anthony has some prank stories.