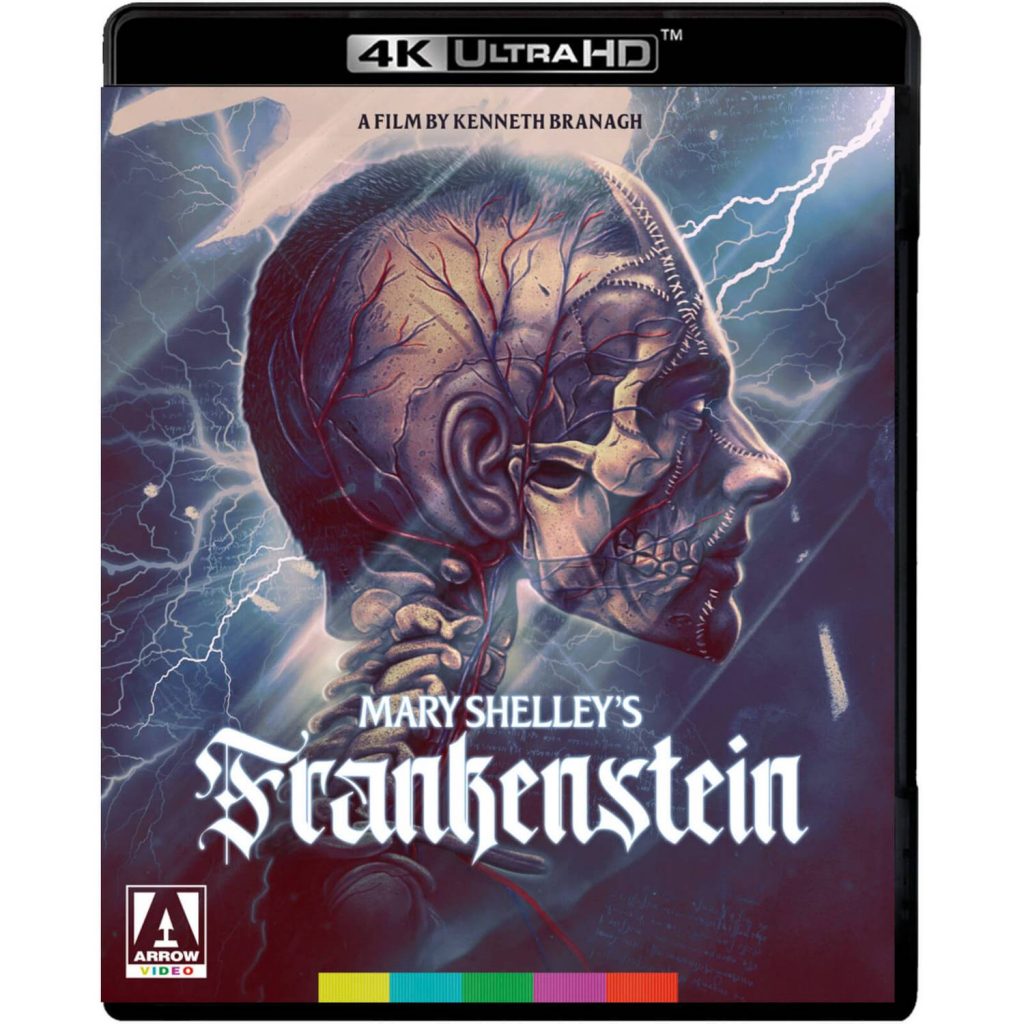 Mary Shelley’s Frankenstein opened while I was working at a movie theater. I still remember seeing it one Saturday afternoon before I worked the evening shift. The new Arrow 4K UHD brought me back to that experience, with a few fun surprises.

You can still see the grain from the 1994 film, but I don’t think my old theater captured the colors Arrow did. The blue in the Frankenstein manor is vivid, and running around the mountains has real Sound of Music vibes. When the film turns to fire and brimstone, as director Kenneth Branagh is wont to do, it glows.

By the time Victor (Branagh) goes to Ingolstadt, the university and laboratories look more rustic and medieval. You can feel the squishy texture of flesh as Victor sews the body together. Branagh’s pecs glisten in his over the top re-animation scene. The red inflammation around the stitches in the creature (Robert De Niro)’s face really stand out, and fade as his body adapts.

The white snow in the forest while the creature is on the run, and the icy mountains in the bookend sequences, provide yet another distinct 4K look. There are lots of great interior sets and location work throughout the film.

The sound is a bit muted even if you turn the volume up. This mix doesn’t really use the rear speakers much. By 1994 I do remember big surround sounds but it does justice to Patrick Doyle’s underrated score.

Arrow produced lots of new bonus features for this edition. The coolest though is the 1910 silent Frankenstein film. It really skips over a lot to get to the big scenes and spends the bulk of the brief running time on the re-animation, but you would have gotten your money’s worth if you’d seen it at the Nickelodeon.

In new interviews, James Acheson even discusses Branagh’s physique and he was the costume designer! He also addresses De Niro’s makeup as it pertains to costuming him. Most notably, it took 9 peg legs to get the right fit and De Niro practiced it.

Doyle plays some themes on his piano. Not the most bombastic parts but he talks about those. Makeup artist Daniel Parker also gets technical. Additional features with historians analyze the book and Shelley history, and Branagh’s adaptation.

The commentary by historians goes beyond the adaptation and filmmaking process. They address the use of the term scientist, or rather the lack thereof because they didn’t use that word in the early 1800s.

The packaging includes new, evocative art that highlights the film’s take on a cobbled-together creature. It is reversible though, the other side bearing the theatrical poster which I hung outside the theater in 1994.

Arrow also included a booklet with two thorough articles. One on various Frankenstein adaptations compares Branagh’s faithfulness to others, and in the context of Branagh’s filmography. The second article is a provocative analysis of the film’s take on the morality and responsibility of science.